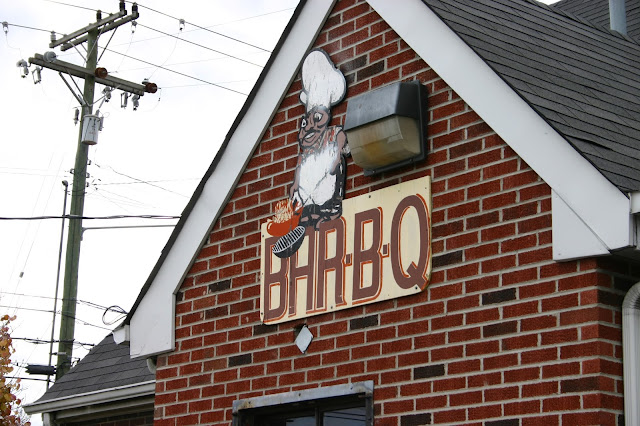 This week we really get down to business.

Jefferson Street is the historic heart and soul of Nashville's African American community. It is home to the city's three historically black universities - Fisk University, Meharry Medical College and Tennessee State University. In the 40s, 50s and 60s, Jefferson Street was a thriving hotspot of jazz and R&B, with artists like Duke Ellington, Count Basie, Ray Charles, Fats Domino and Little Richard regularly playing the clubs and ballrooms that lined the street. But the construction of Interstate 40 in the 1960s ran roughshod through through this district, and by all accounts it has never been the same since. Today, it is an area that has felt the sting of years of urban blight, though there continue to be efforts of renewal in some patches.

And in the old as well as the new, barbecue thrives. No area of Nashville is more rich with barbecue restaurants than North Nashville. Whether it be Jefferson Street or Clarksville Highway (which we will examine next week), you don't have to look very far to find barbecue. 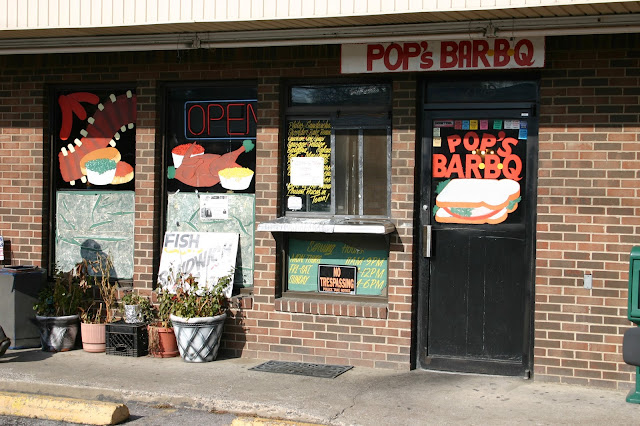 Pop's Bar-B-Q is not actually on Jefferson Street, but a couple of blocks away at the intersection of Clifton Ave and 28th Ave N. As with nearly all of the barbecue places in this area, it is takeout only. As you look over the duct-taped menu, you can see that there are some unique items available. 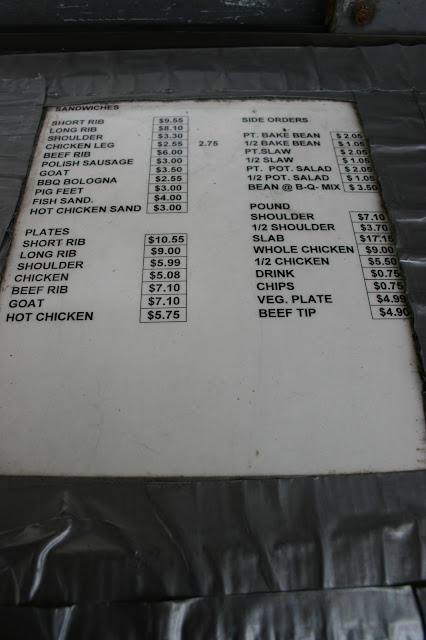 Yes, you can get a goat sandwich. Only on Saturdays, though. Pig? You can get that every day. 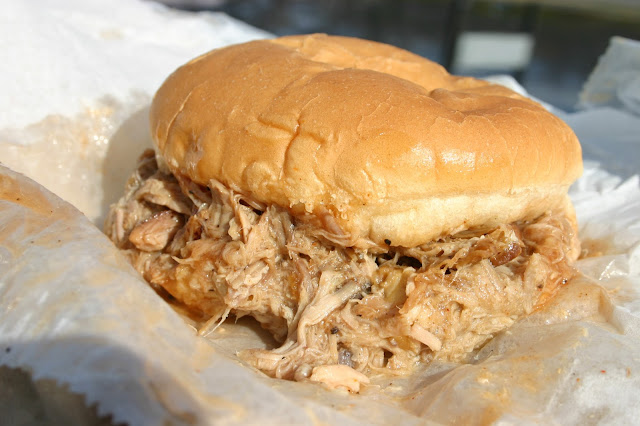 Before it was even removed from the paper bag, I could tell that the shoulder sandwich was very...juicy. I'm not sure if the meat was soaking in a bath of sauce beforehand or if the sauce was applied after the meat was put to bun, but this sandwich was thoroughly saturated with sauce, to the point that the bottom half of the bun had turned to mush. 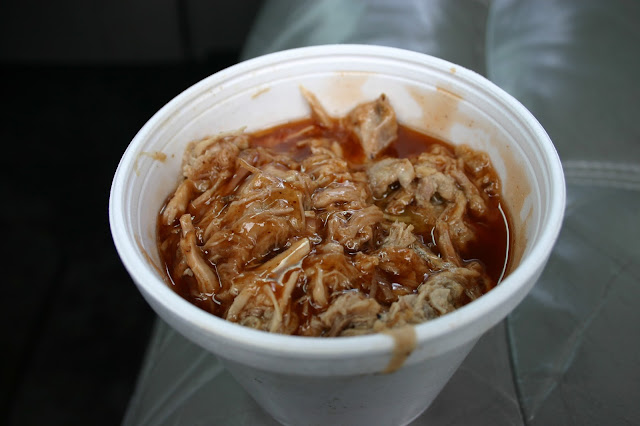 Perhaps a better way to enjoy Pop's pulled pork is with a fork. As you can see above, if you order by the pound or half pound, it comes with so much sauce that it's almost like a stew. The sauce is thin and subtle - equal parts tomato and vinegar, slightly sweet. The actual meat is smoky and has a nice flavor, but is so saturated with sauce that it has lost any textural definition. 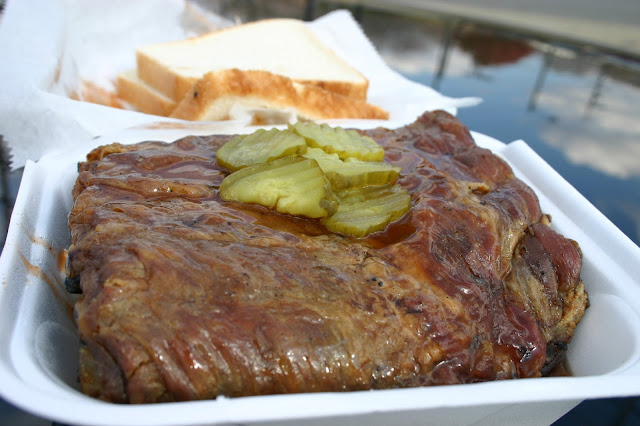 The ribs at each of the restaurants in this report were very similar. All were untrimmed spares, cooked just shy of fall-off-the-bone. The exteriors were chewy, with a nice salty flavor and heavy on the smoke. The differentiation was in the sauce, which was not applied until the ribs were served. In the case of Pop's, the sauce is the same thin stuff that was on the shoulder. It put a nice glaze on the ribs, but much of it wound up pooled in the bottom of the styrofoam container. 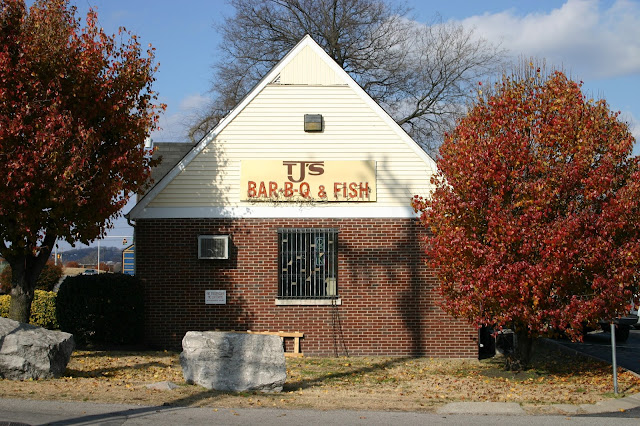 It is very common for the black-owned barbecue restaurants in Nashville to also serve hot fish sandwiches, which are kind of a local specialty involving fried whiting filets dressed with hot sauce, yellow mustard, raw onions and pickles (I predict a series of Ulika hot fish sandwich reports in the future). TJ's Bar-B-Q & Fish even has fish in the name. TJ's is in an old house at the corner of Jefferson and Ed Temple Boulevard, right across the street from TSU. 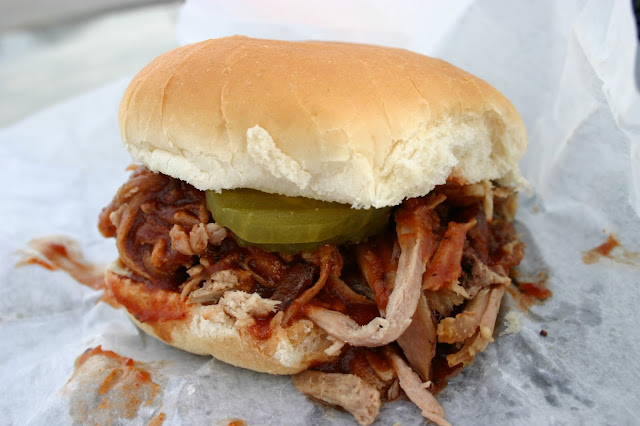 The shoulder sandwich at TJ's could not be more different than Pop's. The pork is pulled in large, coarse pieces that, unfortunately, are dry and bland. As a result, the sandwich leans on a heavy application of thick tomato-based sauce for its flavor. 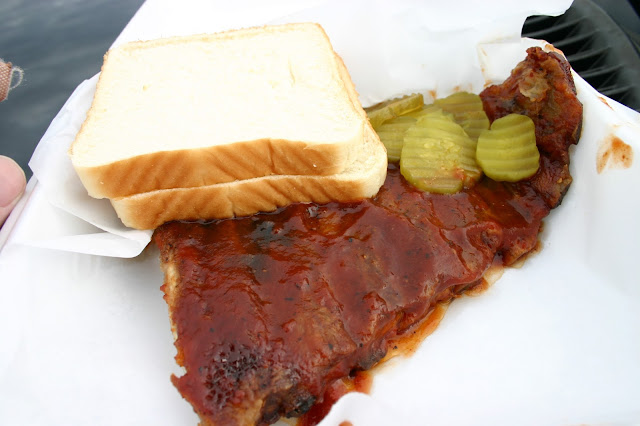 The ribs are a little better. They are big, meaty spareribs, well-seasoned and toothsome, slathered with (but perhaps overwhelmed by) the thick tomatoey sauce. 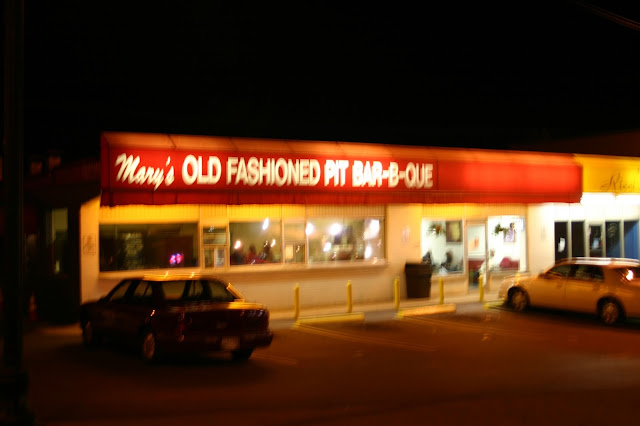 Mary's Bar-B-Que is the undisputed queen of Jefferson Street. Mary's is known for staying open really late - 2 AM has traditionally been the closing time on weekends, but the woman working when I was there this time said they now close at midnight. Whatever the current closing time, I thought it would only be right for this review to take place at night. 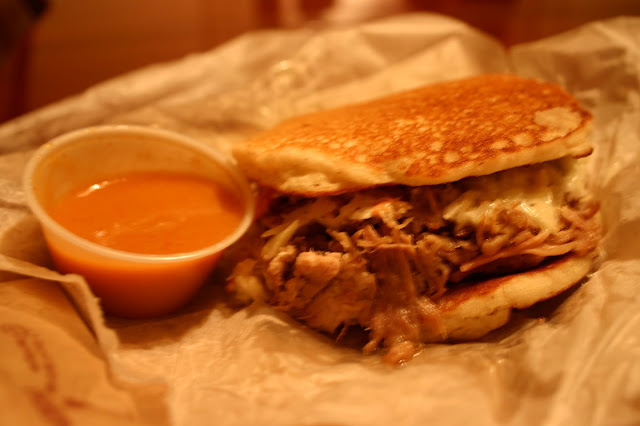 This shoulder sandwich on cornbread is outstanding. It's got a little touch of Memphis with the slaw, and the hoecakes are a unique twist. What the hoecakes lack in manageability, they make up for in taste and texture, especially if they're fresh. The pulled pork at Mary's is definitely the best I've had on Jefferson Street. The texture is perfect - juicy pieces of pork with crispy little bits of bark throughout. It's a great match for the cool, sweet crunch of the slaw. And I haven't even talked about the sauce yet! Mary's sauce is dynamite. It's medium thick and straight up orange in color. It's just a little sweet, but mostly spicy and heavy on the mustard, with ketchup as more of an afterthought. Even the mild that I order gives a significant kick to the sandwich. I bet the hot is no joke. 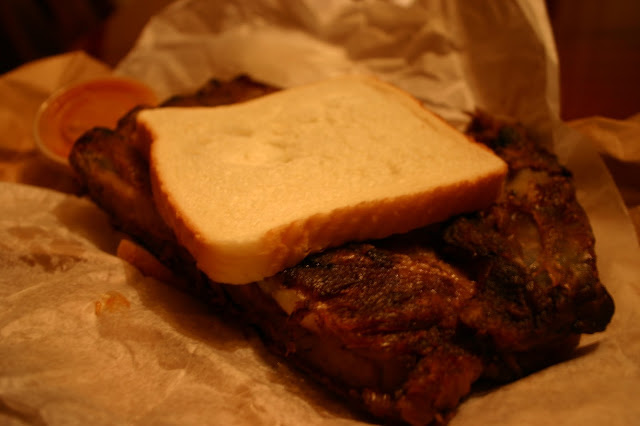 The ribs themselves are on par with the other ribs I've had in these reports - chewy salty bark with a tender juicy interior. With Mary's awesome sauce on the side, though, these ribs are a treat to eat - pull off a chunk and dip it in the sauce. It made me laugh that when you order a rib sandwich at Mary's, they actually assemble it like a sandwich, with a slice of bread on the bottom and another on top. 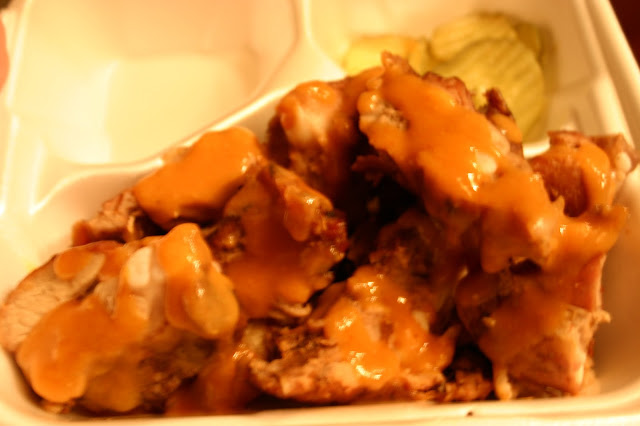 Mary's serves rib tips, which is interesting considering their ribs come with the tips still attached. I am a rib tip fan (rib tips are kind of like the burnt ends of ribs!), but I didn't love these. It almost seems like these tips did not come out of the same cooker as the shoulder and the ribs. They are stark white and have no evidence of smoke. They're not well done enough - there are no crispy crunchy edges and no melt-in-your-mouth tender meat inside.

I want to try that goat.