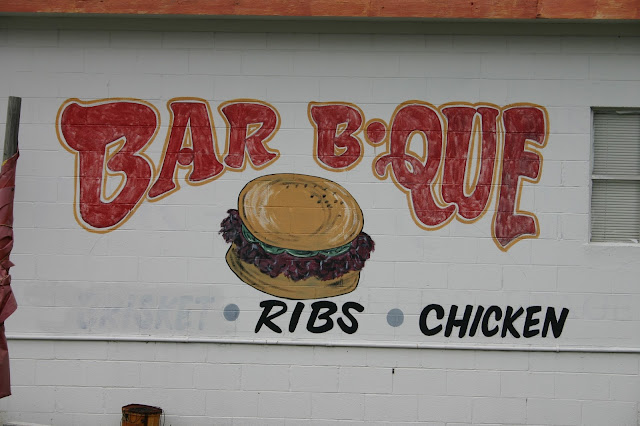 In this report, we'll cover the barbecue restaurants in the rest of Rutherford County. I'll confess that other than occasional trips to the air show and the Omni Hut, I have not spent much time in Smyrna or La Vergne. But with both of these towns booming the way they are, perhaps there will be more reasons to visit. 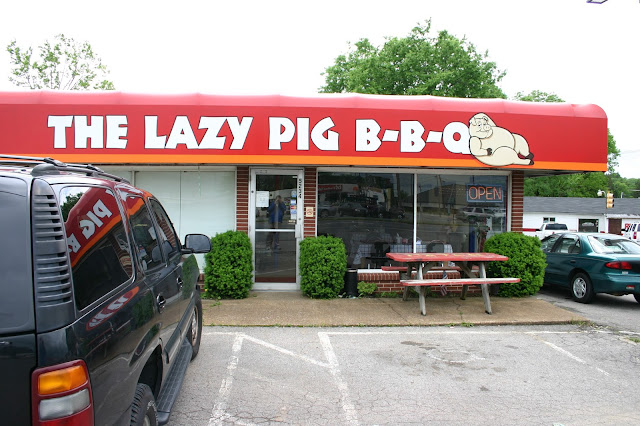 My first stop was La Vergne's Lazy Pig B-B-Q. Upon arriving at the Lazy Pig, one can't help but notice the impressive set of cookers parked out front. 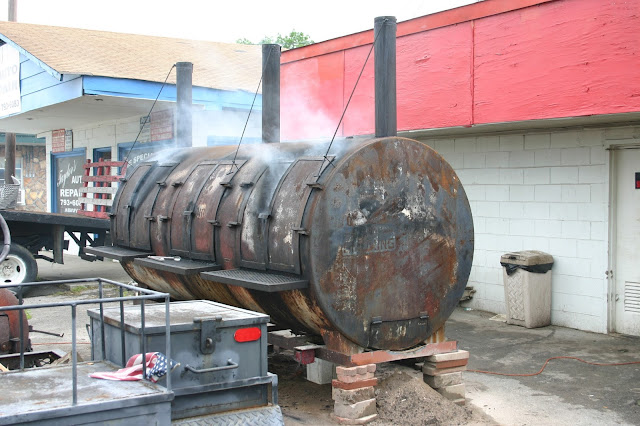 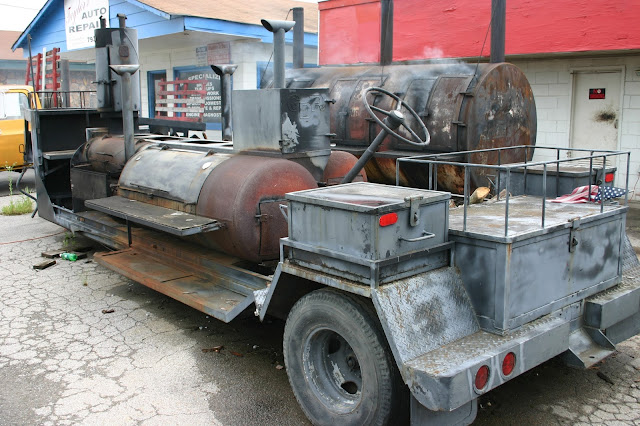 Yes, that second one appears to be drivable.

While it is always a thrill to see ramshackle old cookers and big stacks of wood in front of (or behind) a barbecue joint, one thing that I've learned in doing this series of reports is that cooking barbecue the "old school way" does not guarantee a great product. That's not to say that cooking on more modern equipment does either. But when it comes to barbecue restaurants, I've traditionally clung to the belief that places cooking with real wood on an old offset smoker are inherently "better." And what I'm learning is: that's not always true. 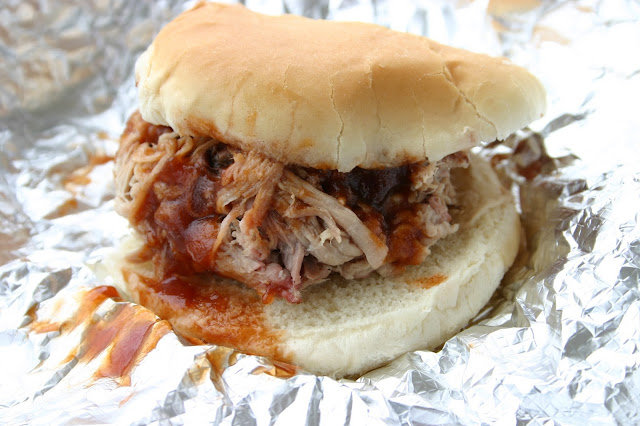 The Lazy Pig's sandwich was not bad, but not especially good, either. The pulled pork was a little on the dry side and was exceedingly bland. The overall taste of the sandwich was helped considerably by the tasty mild sauce that was generously applied. Overall, not a memorable sandwich. The ribs were spares and held quite a bit of meat. They were cooked to a good tenderness, but flavor-wise, were not much better than the sandwich. Beyond their considerable smokiness, there was not much flavor present at all.

I had heard very favorable reviews of The Lazy Pig, so maybe I just caught them on the wrong day? 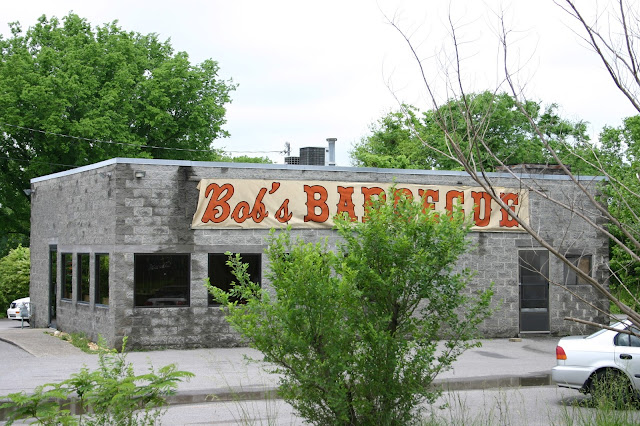 Moving on into Smyrna, the next stop was Bob's Barbecue. That's it, hidden behind the bush there. It's a spartan building that contains a dining room and a drive-thru. The barbecue that they turn out turned out to be rather spartan as well. 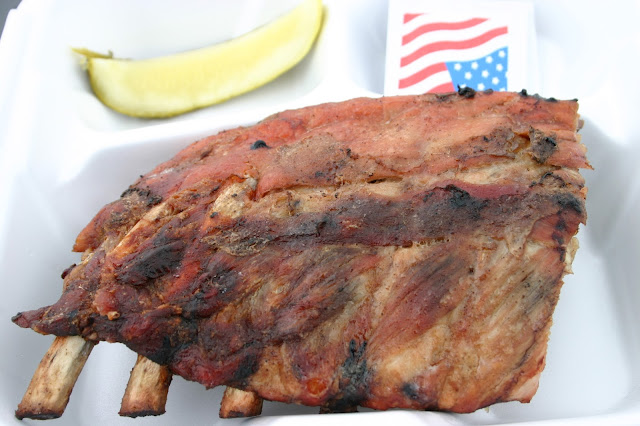 These ribs missed the mark completely. In fact, they were approaching the realm of 'inedible,' simply because they were so tough. I literally could not pull two ribs apart from each other, even with the leverage of a full inch of bone on the last rib. Flavor-wise, from what I could gather, the ribs had received little to no seasoning of any kind. Very, very poor. 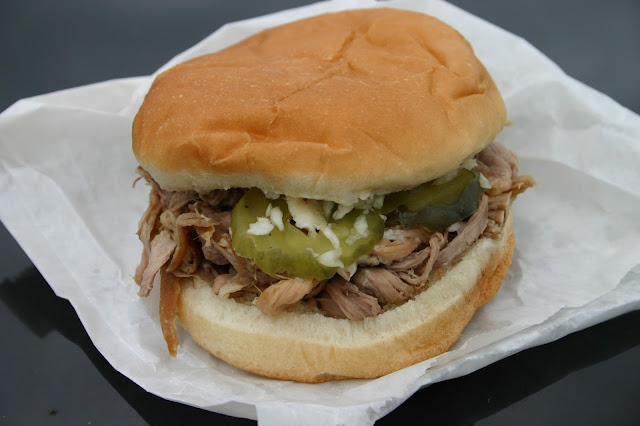 The sandwich was thankfully more tender, but definitely from the Whitt's school, in terms of construction - dressed with mayonnaise, slaw, and pickles. The vinegar-based barbecue sauce that came on the side was also reminiscent of Whitt's. All in all, I had no idea that there were so many barbecue restaurants in this area working off of that formula. But it makes sense if you think about it - Whitt's has obviously been successful, what with their 22 locations and 20+ years of reader's choice awards for best barbecue. But I digress. The pork on Bob's sandwich was tender and juicy, but not very smoky. 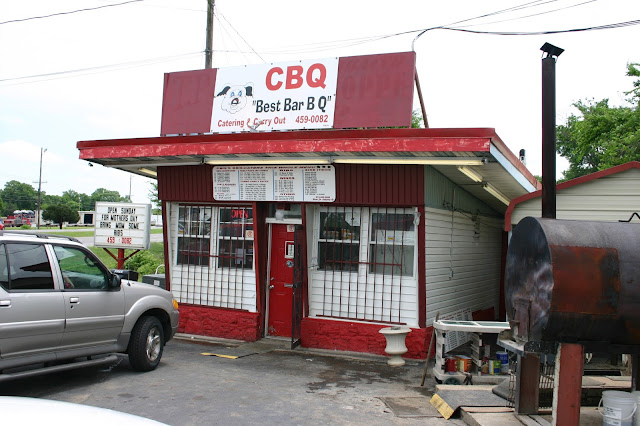 So is there any good barbecue to be found in the La Vergne-Smyrna corridor? Yes. As you leave the Smyrna city limits headed toward Murfreesboro, CBQ is a roadside shack on the right hand side. It's carryout only, although they do have a couple of picnic tables outside. If the building looks familiar to you, it's because CBQ used to be Smokin' Ed's. Apparently, Ed has retired and the new operators have changed the name. I'm happy to report that the barbecue is just as good as it ever was. 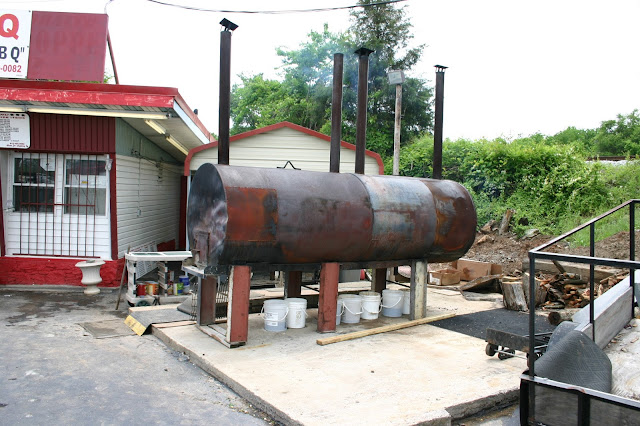 It's another giant old cooker! 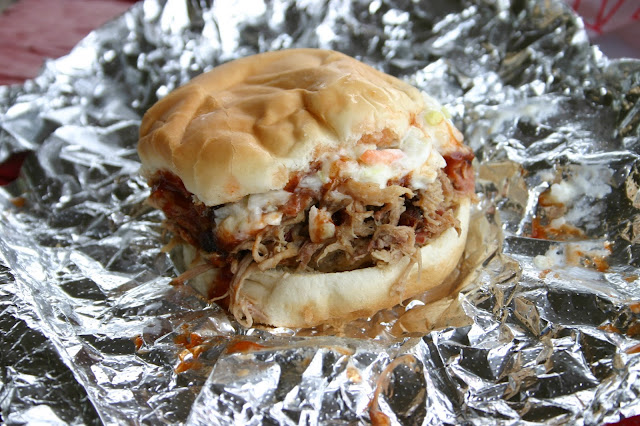 The barbecue sandwich at CBQ is a true delight. The buns are grilled on a flat top, the pulled pork is just about perfect - tender, smoky, flavorful - and the slaw and hot barbecue sauce play wonderfully off each other. It's a sloppy mess, but it's delicious. 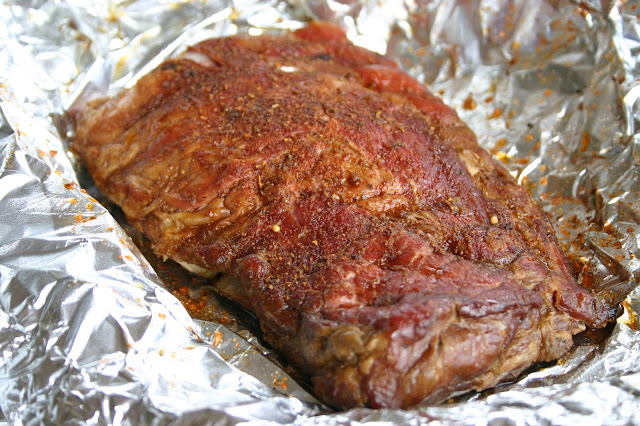 Would you believe that these are baby back ribs? I don't believe I've ever come across a rack of baby backs with as much meat as these had. As you can see, they came unsauced, which I've kind of come to disdain, just because so many of the ribs that come that way seem to wind up being so blah. But not these. They were nicely seasoned, allowing the taste of the pork to shine through. If there was one complaint, it was that these ribs were cooked well past fall-off-the bone to the point where it was impossible to pick them up. They were very enjoyable anyway.

that "drivable" cooker is really something. they should maybe drive it off a cliff

I live in La Vergne and have lived in Rutherford county my whole life. I have to say that I couldn't disagree with you more. Bob's is a staple of Smyrna since it was really the first long standing BBQ joint in town. I've never really had any complaints with Bob's other than being a little bland. I've always had good service there. The Lazy Pig, in my opinion, has the best around. Bland? I've never had that problem there. It's always flavorful. In fact, that's the main reason I go there. To me everyone else's Q is bland compared to theirs. Just my opinion. I was on the Smyrna side of the county coming back from Murfreesboro when I decided to give CBQ a shot. I went in and ordered a Lb. of Q. I noticed the employee take the meat out of the fridge and then proceeded to microwave it to serve to me. In my mind that's not BBQ. I asked for my money back (I believe it was around $16.00 for a Lb. and 2 pint sides) and went to Wendy's instead. Haven't been back since and needless to say after that impression I won't be going back. Seeing as CBQ is the only place with a good review on here it makes me wonder if you guys are in with the CBQ owner(s) or something. Especially since those guys are his biggest competition in close proximity to him. If Bob's was so bad then how has he hung around so long seeing as there is so many other places to get Q in Smyrna now? All I know is 100's of customers from Bob's and The Lazy Pig can't be wrong. They must be doing something right.

check out the disclaimer, bro

Thank you for reading our blog.

We realized when we started doing reviews here that not everyone would agree with our opinions. And that's okay. One of the great things about barbecue is the passion that it inspires in people, and the ever-evolving discourse and debate that surrounds it.

I assure you that no one on this blog is affiliated with or has any type of relationship with the owners of CBQ or any other barbecue restaurant in the area.

I will definitely give Bob's and The Lazy Pig another try when I am down that way again, and hopefully they will be better. I want every barbecue restaurant to be great, and I am certainly not rooting for any of them to fail.

Thanks again for reading!

Who can prescribe to me the best item among those in the rundown on this site?
Best Pellets for Smoking.