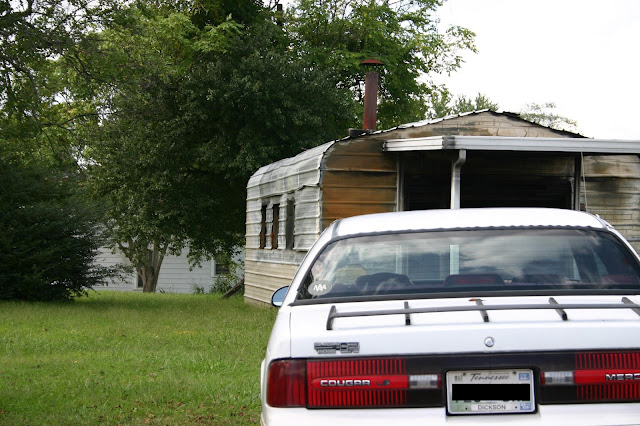 The logical conclusion to our barbecue tour of Nashville's surrounding counties would be Cheatham County, which lies directly west of Metro Nashville. However, aside from the ubiquitous Whitt's, which we have already covered, there does not appear to be a single barbecue restaurant currently operating in Cheatham County. And that's a shame, because Ashland City would be a great place for a BBQ joint - it's one of my favorite small towns in Middle Tennessee.

So what we will do is sub in Dickson County, which is just a little bit further west. 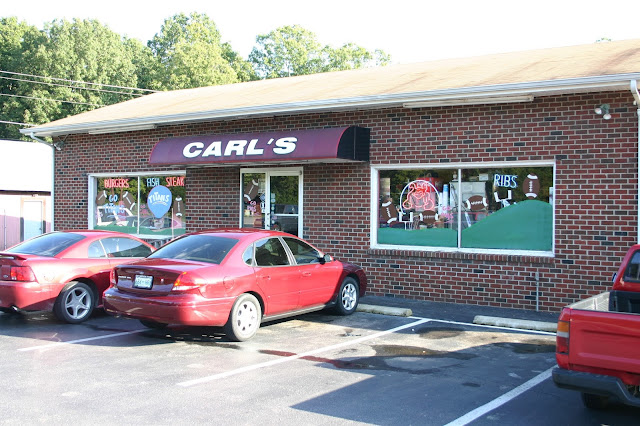 We begin in White Bluff with a familiar place. Carl's Perfect Pig was one of the first places we reviewed on this blog. I don't know whether my standards have escalated over the last 2 years, or if Carl's has declined, but I was not as impressed with their product this time around. 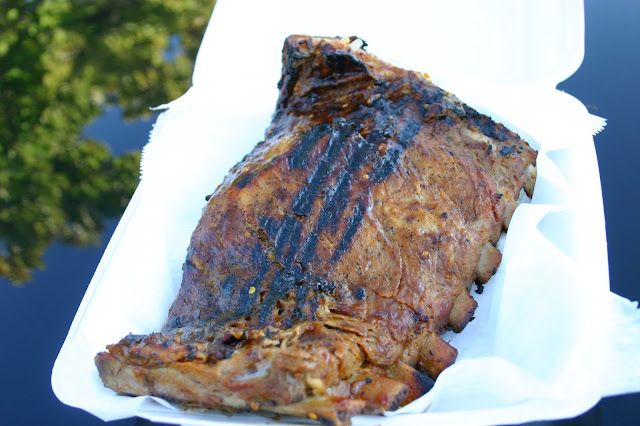 The ribs were big and meaty, and were definitely finished on the grill. And they were actually cooked to a nice tenderness. But they were significantly lacking in flavor. Beyond the light application of sauce on the outside, these ribs were pretty bland. 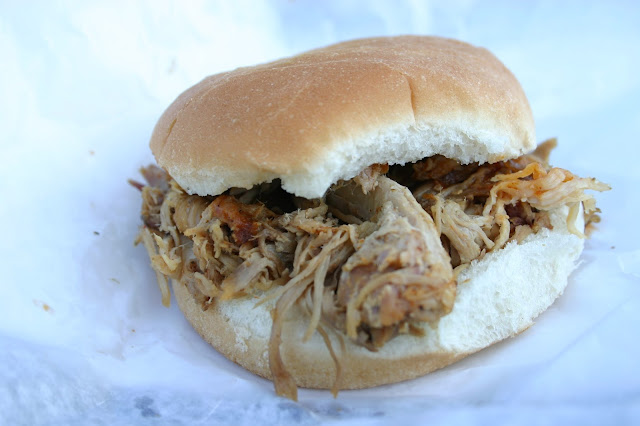 The pork sandwich was better. The meat was nicely seasoned and was complemented very well by the sauce. Overall - good flavor. The texture and tenderness were average or slightly better. This is a very serviceable barbecue sandwich, but not mind-blowing by any means. 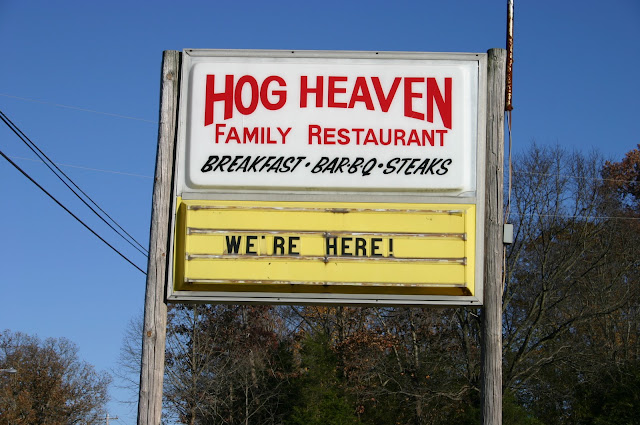 Next up, and also in White Bluff is Hog Heaven (no relation, apparently, to the Hog Heaven in Nashville). 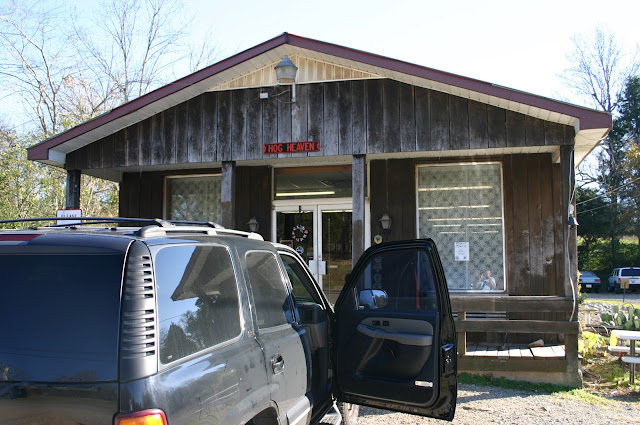 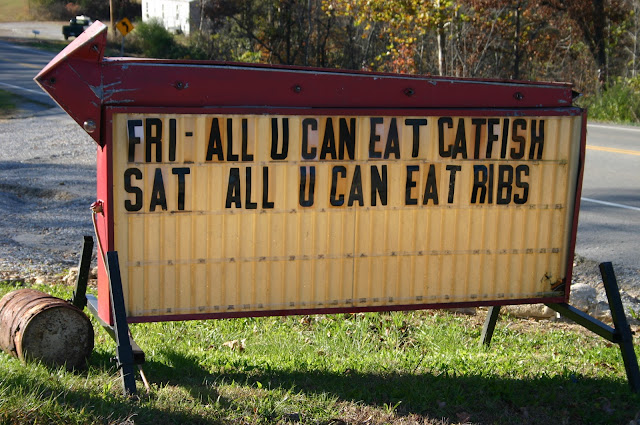 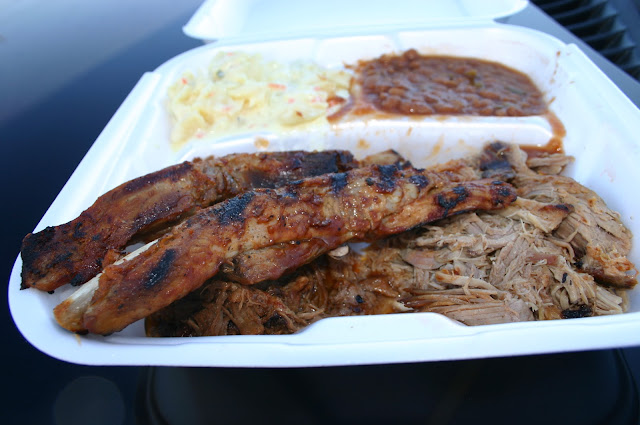 Unfortunately, the barbecue also bears little resemblance to the other Hog Heaven. What you see here is a combo plate with ribs on top and pulled pork on the right. There is also some "pulled beef" hiding under the ribs, but that's outside the scope of this report (and not worth talking about anyway).

This pulled pork was very poor. It was dry, but that's not the worst part. It had a very unpleasant, almost rancid flavor that I could not take more than one bite of. I'm not sure what went wrong here. This is the worst pork that I have tasted in these reports.

The ribs were not much better - dry and chewy and overwhelmed by a smoky flavor that was not pleasant. 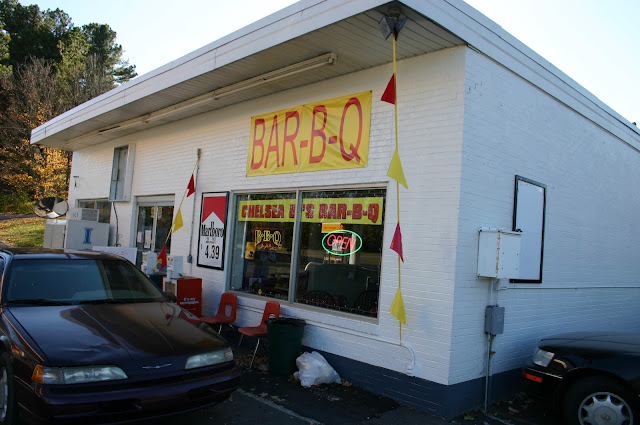 Chelsea B's is located in a Shell gas station on Highway 47, between White Bluff and Charlotte. 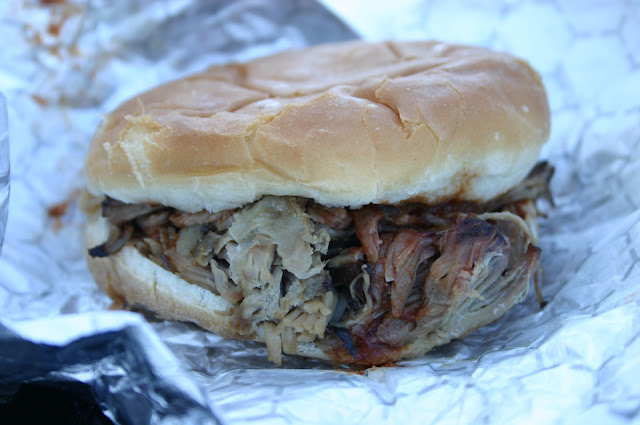 They were sold out of ribs on the day that I visited, so I went with just a pulled pork sandwich. When I ordered, the fellow at the counter simply reached into a steam tray and removed a pre-made, pre-wrapped sandwich and told me that sauce was already on it. So it was no surprise that when I unwrapped the sandwich, I found the bun soggy and the meat mushy. The meat was lightly smoky and aided by the peppy ketchup-based sauce, but the poor texture of the sandwich was just too much to overcome. 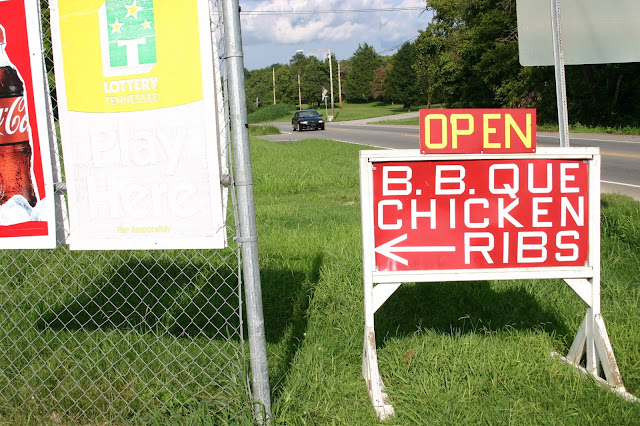 Moving on to Charlotte, Tennessee, I encountered the above sign near the intersection of Highway 47 and Highway 48.

The arrow on the sign pointed to this building. 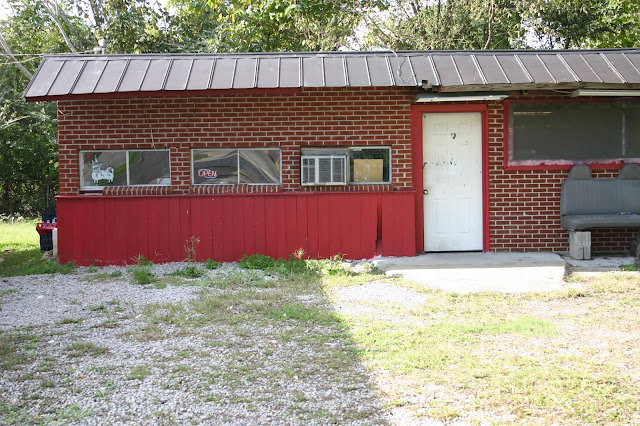 There was no sign, but I knocked on the door and was greeted by an older gentleman. He took my order, then disappeared into the other side of the building, which appeared to contain an old brick pit. He returned a minute later with my ribs and pork shoulder. There was no posted menu, so I asked him how much I owed him. "Just give me ten bucks," he replied. I asked him what the place was called. He had to think about it for a second, but eventually said, "Bill's Barbecue." I guess he was Bill? 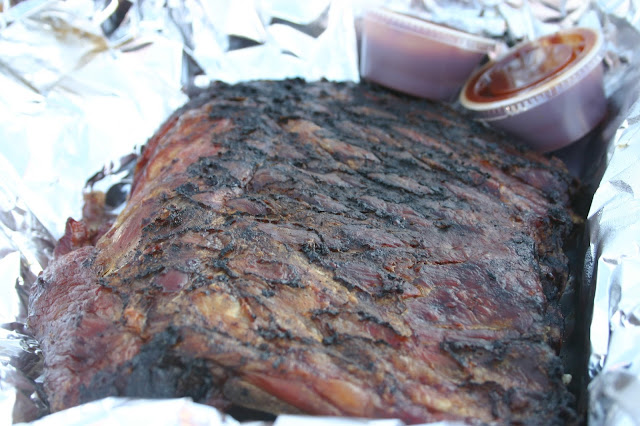 I always want so badly for these kinds of hidden, off-the-beaten-path places to be great. But the reality is that sometimes they're not. Unfortunately, Bill's was not great. The ribs were dry and leathery tough. It was literally difficult to even tear away a bite. 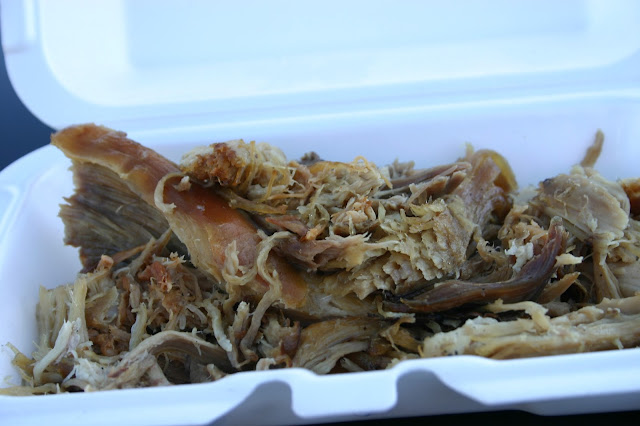 The pork shoulder was more of the same. This is about as dry as pulled pork gets. It was almost the texture of jerky. 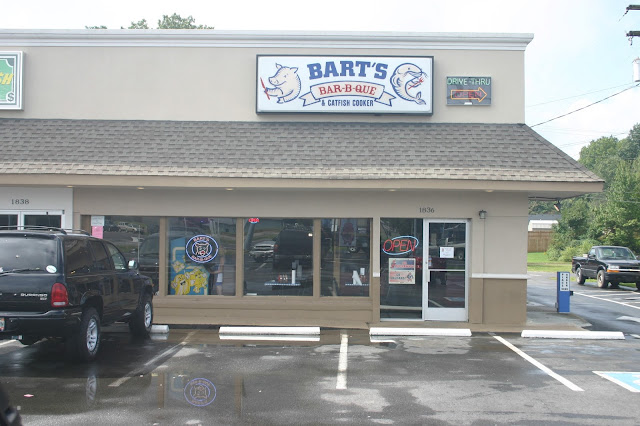 Bart's Bar-B-Que in Dickson, with their flat screen TVs and old school arcade games, is worlds away from Bill's spartan setup. Their sign contains an interesting variation on the pig-eager-to-dine-on-itself motif that we see so often on barbecue signage. Here, we also have a catfish holding a fork! 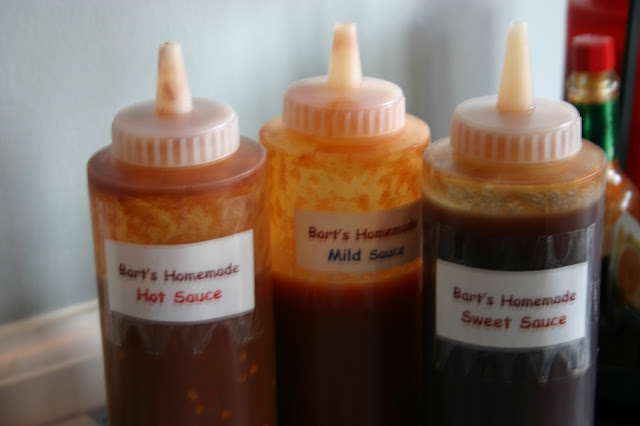 Three kinds of sauce to choose from. 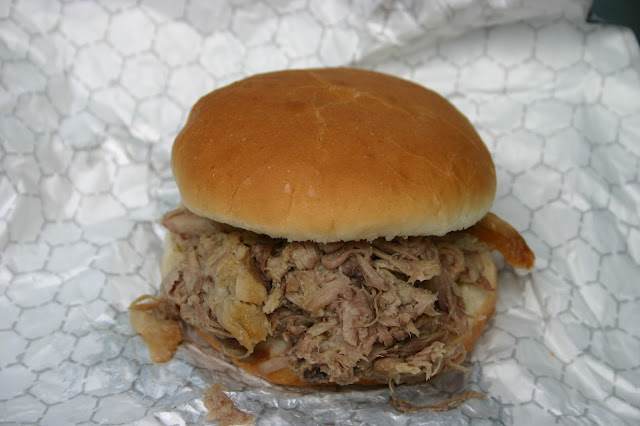 Bart's pork sandwich is average or maybe a bit better. The pork is very tender and well seasoned, with a nice savory flavor. But there is no discernible smoke flavor and there is little textural variety (no bark). 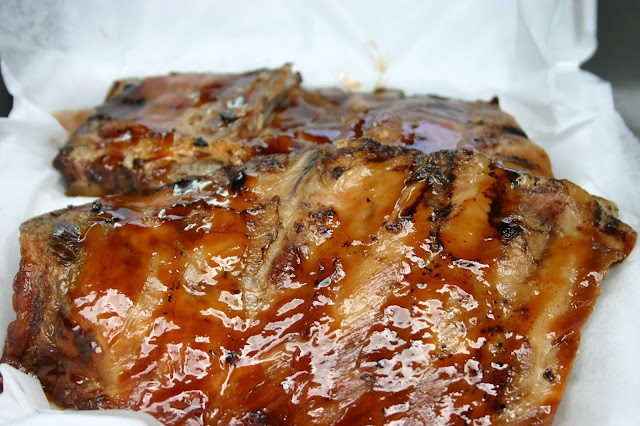 The ribs are also big on tenderness, perhaps even to the point of being overcooked. The tangy applied sauce is a nice complement, but unfortunately there is not much flavor beyond in the meat itself, smoky or otherwise. 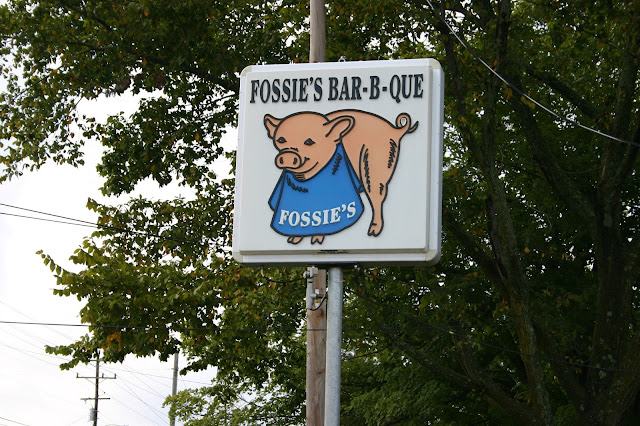 Dickson's other barbecue joint is a little place with a big reputation. Fossie's Bar-B-Que has been in operation since 1958! Milton Fossie and his brother-in-law began in the mid-50s by selling barbecued chickens as a side venture, but eventually became so popular that Fossie quit his job at the Ford Glass Plant in Nashville and opened Fossie's on Walnut Street near downtown Dickson. He operated the restaurant for over 40 years. His daughter took over in 2000 when he became ill. And it's still going strong today. 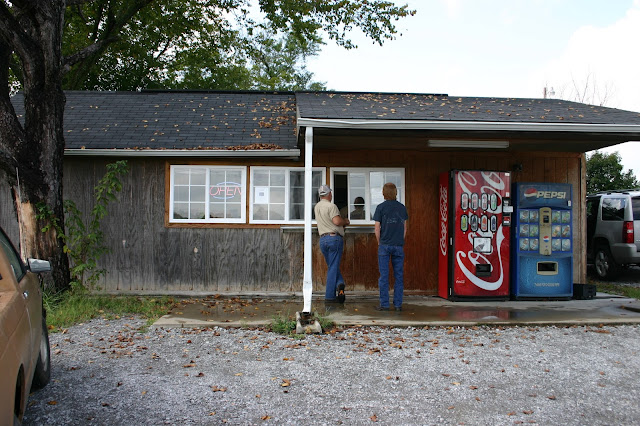 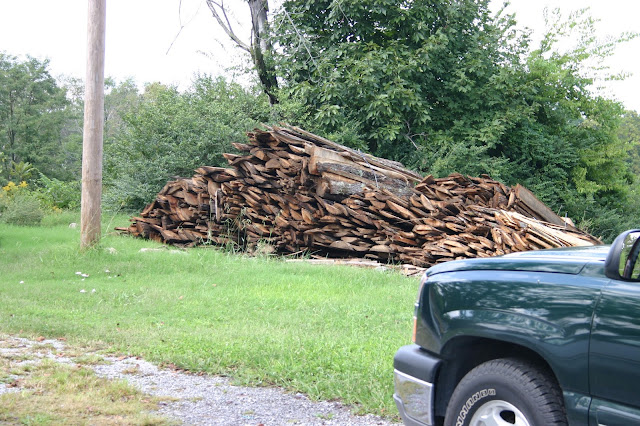 Big wood pile out back. The smokehouse is in the picture at the top of this article. 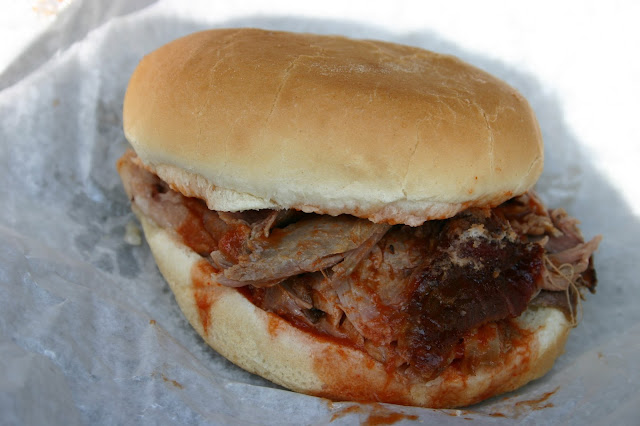 The pork sandwich is simple but tasty. You can taste the hickory flavor, but the sandwich is otherwise sparsely seasoned. The hot sauce is thin and vinegar-based, and complements the pork well. The meat could have been more tender, but overall, a good sandwich. 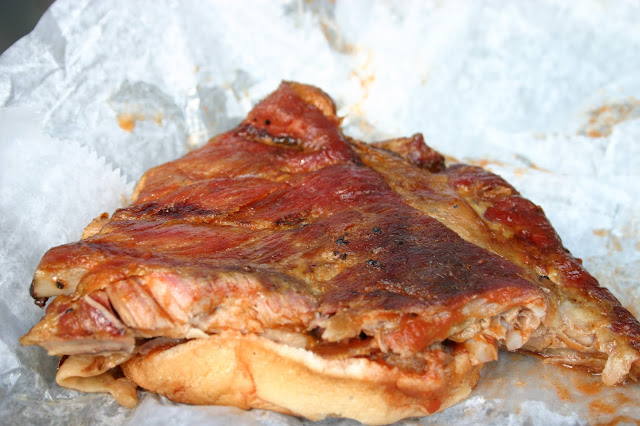 Fossie's ribs are also a picture of simplicity. The outer bark of the ribs is a chewy and salty treat, with a nice pork flavor.

I hate that you hit that run of bad luck. I'm like you, I want the small hole in the wall places to be that hidden jewel.

Maybe the guy at "Bill's BBQ" hesitated to give you the real name because they're a part of the "pitmess protection program".

Have you gotten to B&C in the Farmers Market yet? I suggest going on Friday, when they have both ribs and pulled pork. I forget which day is smoked salmon day, but that's also a good time to visit. They have an unusual but admirable devotion to grits experimentation that's also worth tasting.

We did a review of B&C early on (here). But I plan on visiting again soon and reporting on it.