NASHVILLE BARBECUE: Part 7 - The West Side 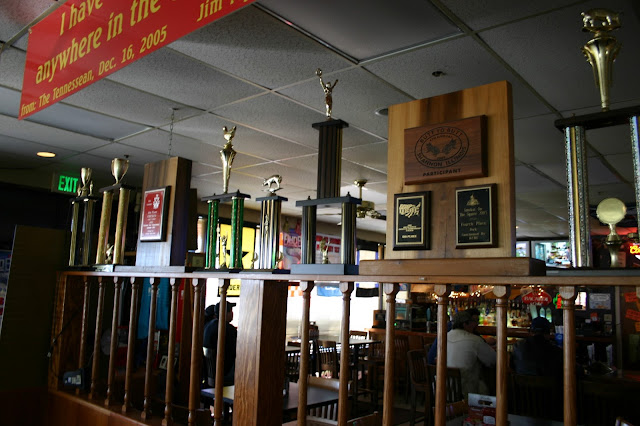 I suppose that this edition is a testament to the tough economic times that have hit the restaurant industry especially hard, as two of the three places I wanted to include in this report have gone out of business. Nashville's west side has never been especially rich with barbecue restaurants, but now we are down to just one non-chain establishment. 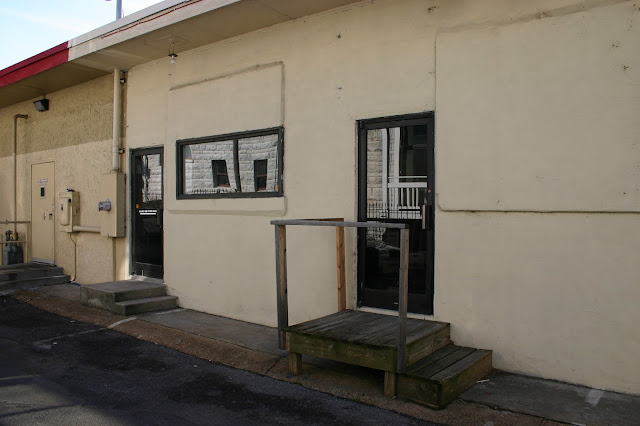 I'm not sure when exactly Lonnie's BBQ Bar bit the dust. I ate there a couple of times soon after it opened and was very unimpressed, so it fell off of my radar screen. For those of you not familiar, this place was behind a Pizza Hut in the back half of a shotgun building on West End Avenue, across the street from Valentino's and the St. Mary's Bookstore. You can find a more proper review here. 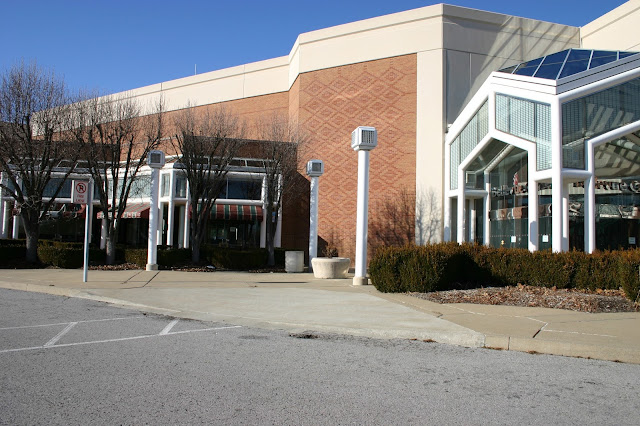 Unlike Lonnie's, Fate's Pig & Pie was one of my favorite Nashville barbecue places. It began in early 2000 in a roadhouse-style location on Charlotte Pike, which was fantastic. In my opinion, that place was the quintessential southern barbecue joint. Then they dropped the "Fate's" from the name (parting ways with co-founder Fate Thomas Jr, I assume) and moved to...the Bellevue Center Mall?!!! Yes, a barbecue restaurant in a mall. I will never understand it. And to add to the confusion, they were only open on Fridays and Saturdays. Still, even though the atmosphere was horrendous and the hours were constricting, the barbecue was still very good, and I stopped in as often as I could. But late last year, an agreement was reached to sell the mall to a new developer who is going to turn it into an "outdoor lifestyle center." Thus, the mall - and Pig & Pie - have been shuttered. 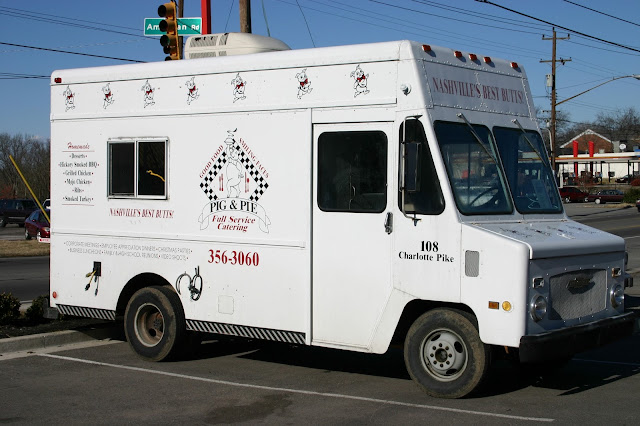 I still see their catering truck around town, and they still have a website. Here's hoping that someday soon they can get back into the restaurant business, and preferably not adjacent to a Sbarro and an Orange Julius. 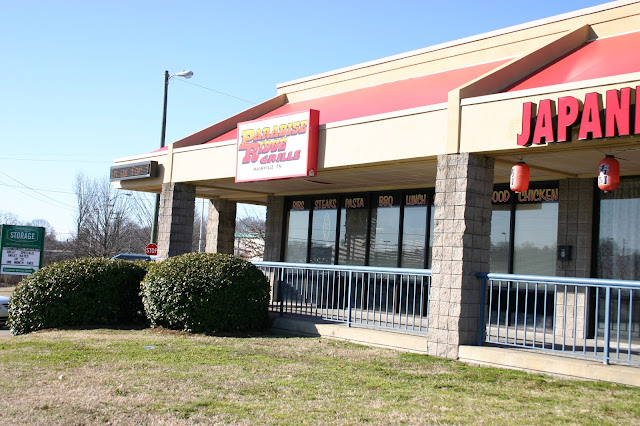 Paradise Ridge Grille appears to be still going strong. Although this West Meade establishment serves a wide variety of food items, from meat & three to chicken wings to steaks and pasta, barbecue is the foundation. This is one of the few restaurants in town that began as a competition barbecue team - and a very successful one at that. The entire restaurant is decorated with trophies and plaques won by father-and-son duo Buddy and Charlie Babb's Paradise Ridge Barbecue Team. 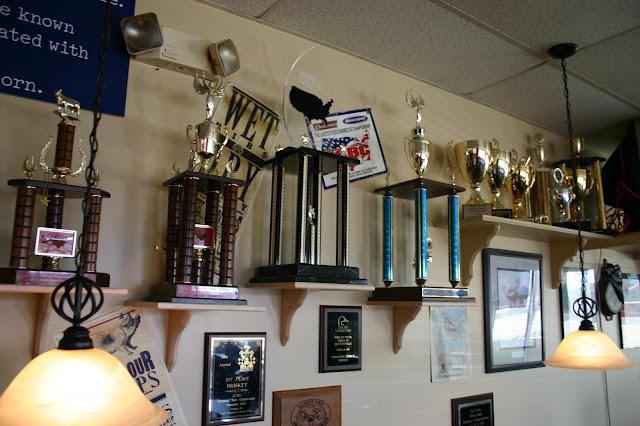 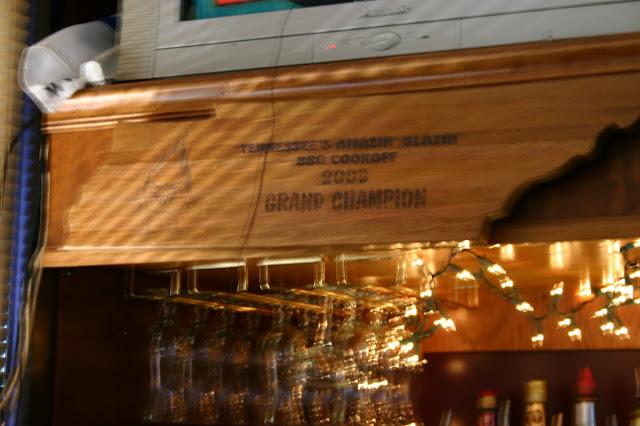 The awards are impressive, but can they pull it off in a restaurant? 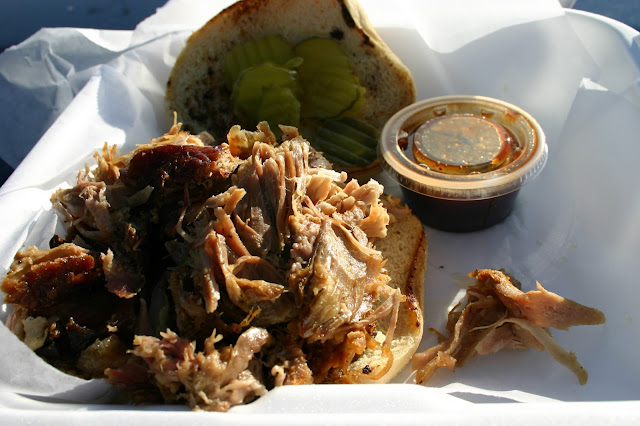 The barbecue pork sandwich looked fantastic - toasted bun, lots of coarsely pulled pork shoulder, with lots of bark pieces included. I tasted the pork by itself first, as I always do, and was somewhat underwhelmed. The texture was good - very tender, with the bark pieces providing a nice contrast, but the taste came off as rather bland and underseasoned. What the meat lacks, though, the excellent house barbecue sauce makes up for. It's sweet and smoky, but not too thick, with plenty of interesting flavors in the mix. So overall, with sauce applied, and the meat on a nice toasted bun, it's not too bad. 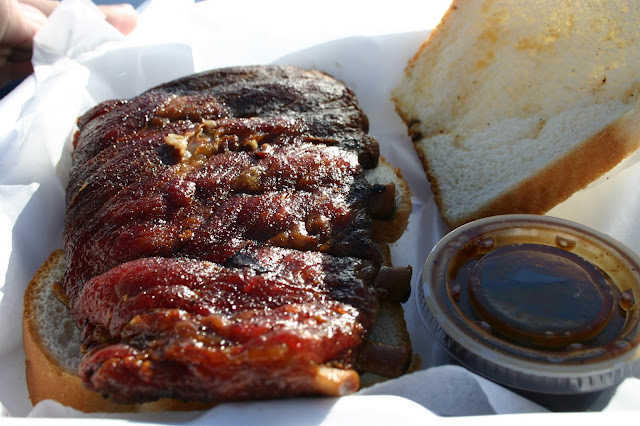 The ribs played out in a very similar fashion. They were cooked just to just about perfect tenderness, but unadorned, they just did not carry very much flavor. Of course an application of sauce made things better.

Not sure if they're still doing this, but the Corner Pub locations in Green Hills and off Hwy 100 in Bellevue do BBQ every Monday dinner with proper smokers. The pulled pork I've had from the Bellevue location was very good.

I love the Corner Pub! I haven't been in a while, but I used to hit it up every Monday for the pork sandwiches.. I've tried to repeat their recipe but can't quite figure it out. Their barbecue sauce rocks!