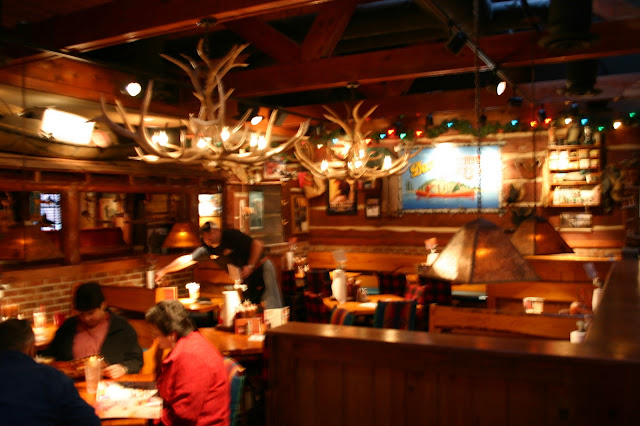 National barbecue chains are a relatively new phenomenon. Up until the last decade or so, barbecue restaurants have been almost exclusively mom-and-pop territory. The last ten years have seen a rash of barbecue chains aimed at a national market. And although the trend has cooled somewhat recently, the national chains still do very well in Nashville. This report will take a look at the major players and see how their barbecue stacks up. 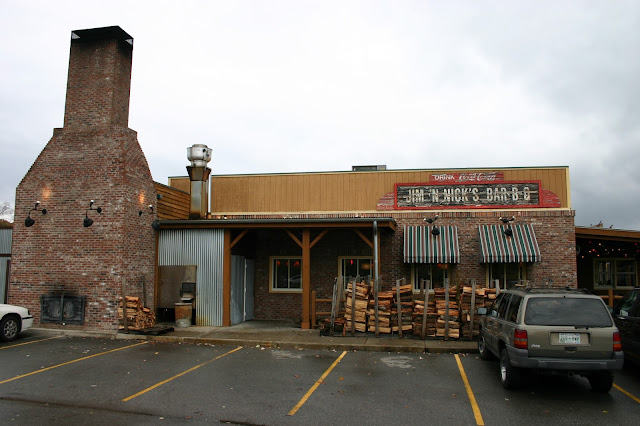 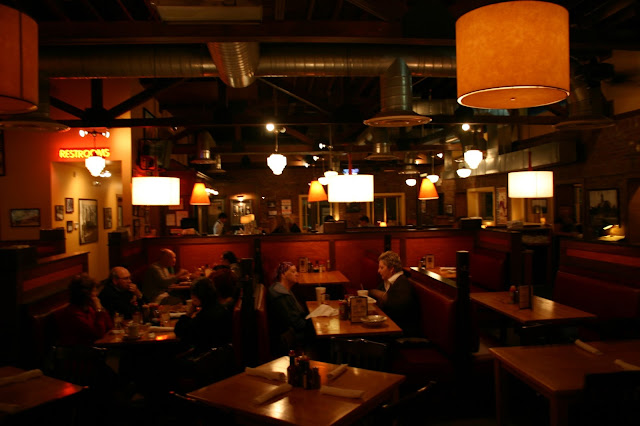 Don't be fooled by the aged look of the exterior of Jim 'n Nick's Charlotte Pike location - it was built in 2004. Jim 'n Nick's is a relative newcomer to the Nashville barbecue scene, but has quickly become one of the city's most popular places. And there is certainly a lot to like about the place. It has an ambiance that is somewhere between Cracker Barrel faux-folk and the smart modern feel of J. Alexander's ("vintage" farm supply advertisements and modern light fixtures!). The restaurant has a commitment to freshness, claiming to have no freezers in the restaurant at all. And they are supporters of the Southern Foodways Alliance, which earns them brownie points with me. But how is the barbecue? 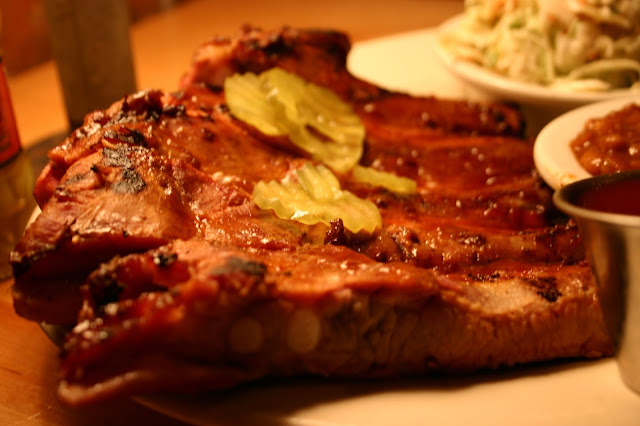 The pork spare ribs (served garnished with pickles) are not much to speak of. They do have a nice amount of smoky flavor, but are otherwise bland. And the ribs that I tried had a tough texture, and definitely could have been cooked a few more degrees. 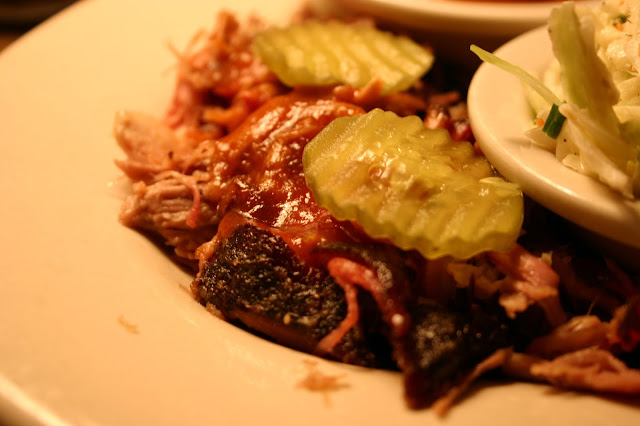 The pulled pork was unfortunately not much better. The meat itself was relatively dry. Like the ribs, the pork definitely had the unmistakable taste of real smoke. If you look in the photo above of the outside of the restaurant, you can see the smokestack and the stacks of wood. Jim 'n Nick's does cook all of their barbecue onsite with real wood, which is commendable for a chain restaurant. But it is very difficult, Dear Reader, to maintain quality control over a product as sensitive as barbecue when you are doing the kind of volume that a restaurant like Jim 'n Nick's is doing. 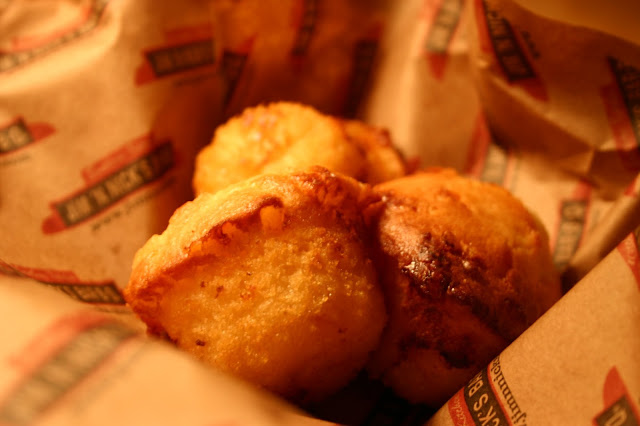 I have gone out of my way in these reports to keep the focus, food-wise, on the barbecue itself, and not things like sides and desserts. I feel that the true merit of a barbecue restaurant should be its barbecue, and not its potato salad. However, the complementary cheese muffins at Jim 'n Nick's cannot go unmentioned. They are fantastic, especially when they are hot and fresh. Sweet and savory, it's Where God Lives. 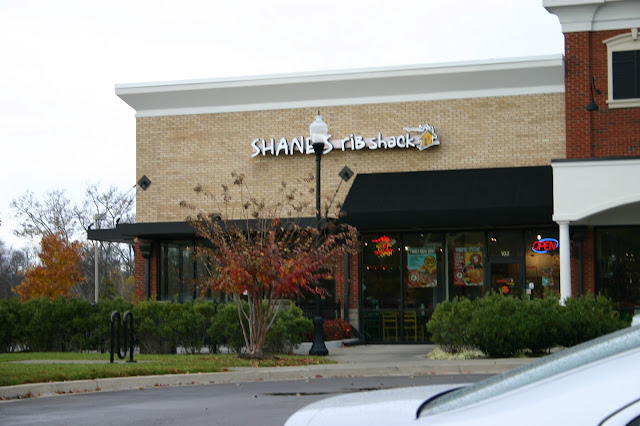 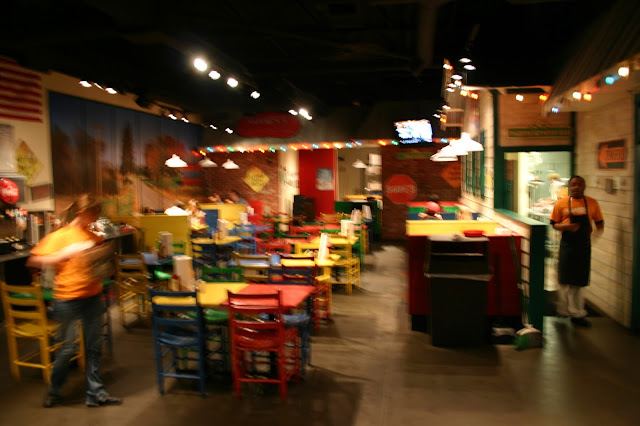 Shane's Rib Shack definitely feels more like a chain restaurant than any of the others in this report - both Nashville area locations (Franklin and Hendersonville) are in strip malls. But despite the massive number of locations, Shane's began as a mom-and-pop joint outside of Atlanta, which is always better than being born as a "concept" in a test kitchen (coughSmokeyBonescough). Anyway, the theme here is "on the road," with mock road signs like "RIB WORK AHEAD" and "SWEET TEA MAY BE ICY". I didn't see anyone but teenagers working there. Are they cooking the barbecue, too? 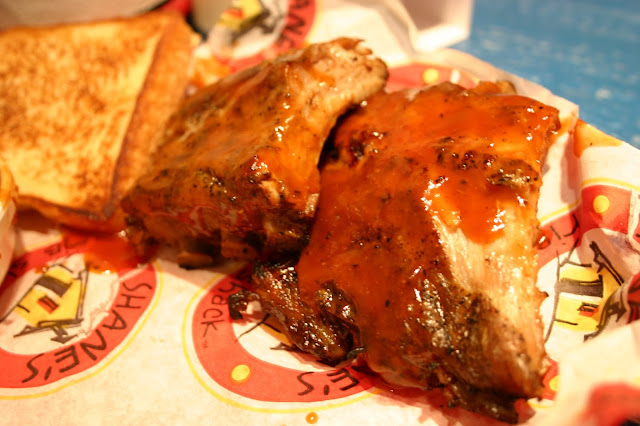 The namesake ribs here are baby backs. There was little to no smoke flavor here, but they were cooked to perfect tenderness, pulling away from the bone with just a little work. And the sauce, generously applied, gives a nice boost in flavor to a rack of ribs that are otherwise unflavorful. 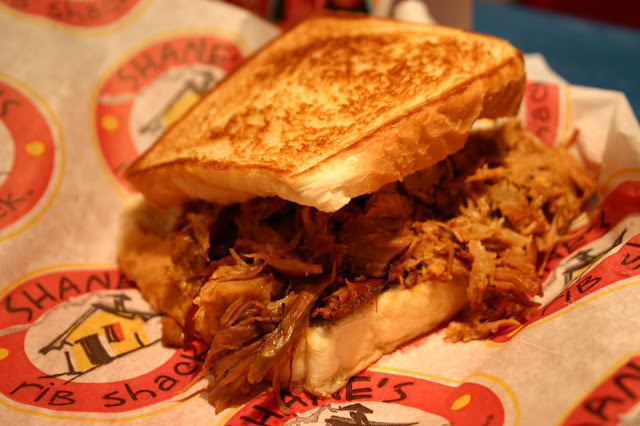 Shane's calls their pork sandwich the "Big Dad sandwich". It comes overflowing with coarsely chopped pork on grilled Texas toast. The pork , while certainly tender, tastes like it might have been cooked in a crock pot. It has the consistency of pot roast. The sandwich is done a great favor by the grilled Texas toast, though. It may not manage the contents of the sandwich as well as a bun, but buttery grilled Texas toast can make almost anything taste better. Add a squeeze of the house barbecue sauce (a lightly sweet ketchup and mustard based concoction) and the Big Dad sandwich is not bad at all. Not much thanks to the barbecue, though. 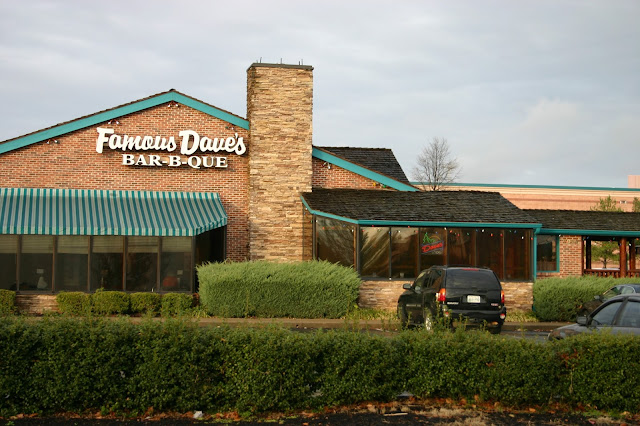 Ah, Famous Dave's. This is about as close as you will come to barbecue in Cool Springs, which is just the kind of location in which Dave's thrives. The theme here is "hunting lodge" (see photo at top). There is a chimney, but I'm not sure it's connected to a cooker. 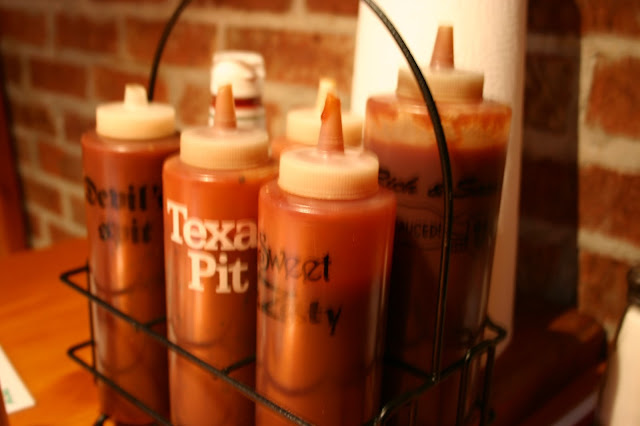 What can I say? I'm a sucker for sauce. One thing that I really found interesting was that the server brought out a small plate of french fries and an empty plate and proceeded to "mix together his favorite sauce" for dipping, a la that sauce that they make at P.F. Chang. He mixed half "Sweet & Zesty" and half "Texas Pit", and I have to say it was very good. 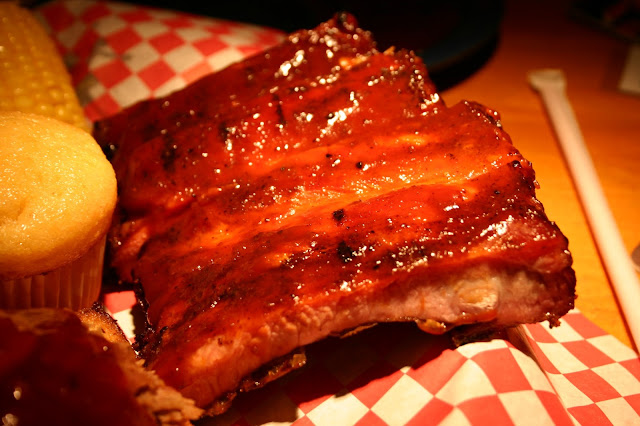 Let me just say right off the bat that I have read in more than one place that Famous Dave's boils their ribs. Boiling ribs is not cool, Dear Reader. So I was fully prepared to scoff at what I tasted. But to my surprise, these were clearly the best ribs that I have tasted so far in these reports. They are St Louis style spare ribs and the ones I had were cooked nearly perfectly. Yes, they did have the membrane still attached on the bottom, but how many racks of ribs does this place serve in a day? I can forgive it. Maybe they're smoked and maybe they aren't, but I seemed to detect the taste of hickory smoke, which worked well with the sticky sweet cooked on sauce. If this is not real barbecue, they certainly fooled me. 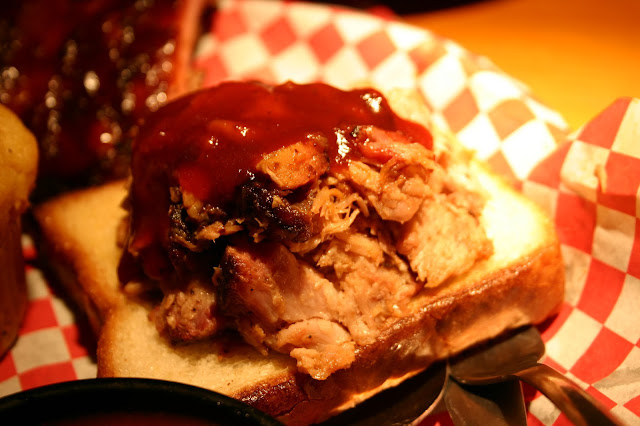 Unfortunately, the pulled pork failed to impress. It was mealy in texture and lacking any definition in flavor.

P.S. I you are interested in reading more about the concept of national barbecue chains, this is an interesting article.

I have read all your articles in reverse order and I have felt the same about most of your articles. I don't know with any certainty how they cook the ribs but I had lots of friends who use to work there and the cooks get in around 4am so that would lead me to believe that there is some fire involved. P.S. you might want to revisit the east side. Driffters just opened up and its not to bad.