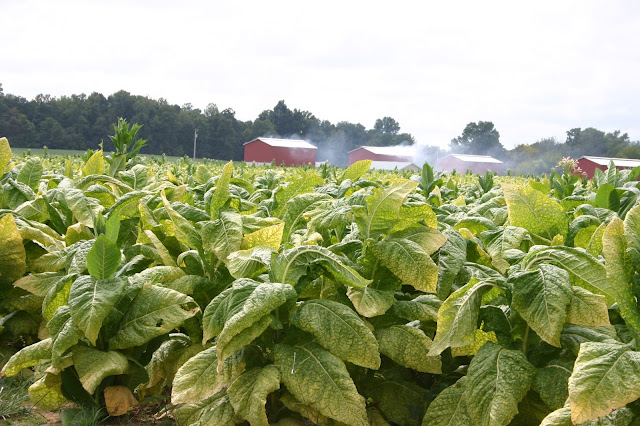 For this edition, we are headed up to Robertson County, where, as it turns out, dark fire tobacco is not the only thing that they're good at smoking. 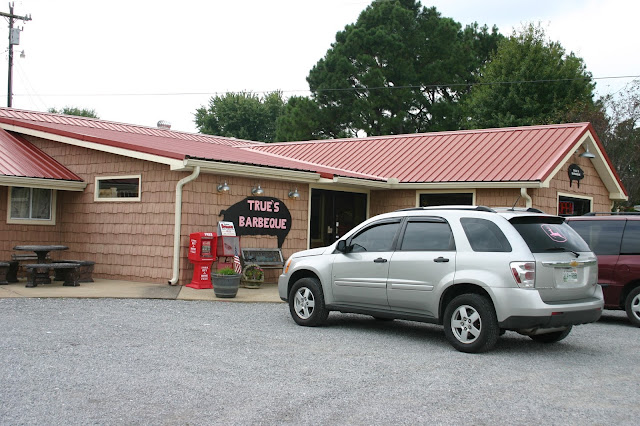 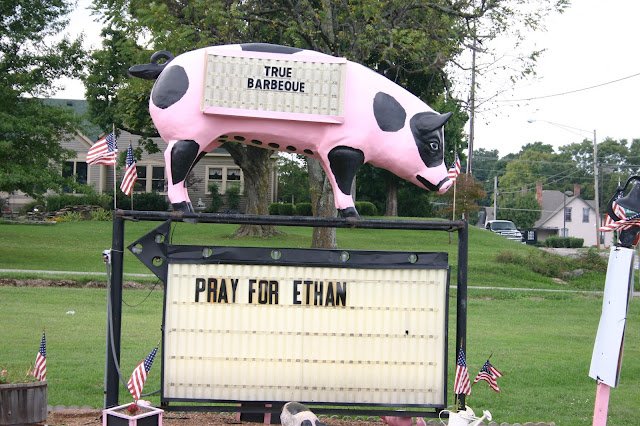 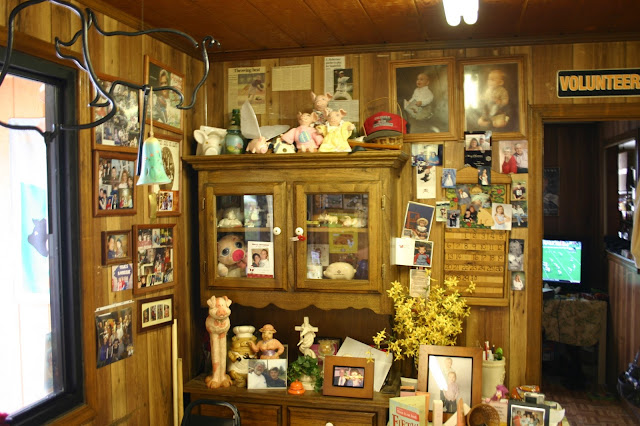 We begin in Cross Plains, Tennessee (home of the annual Trash & Treasures community yard sale every year in June) at True's Barbeque, where there are plenty of trash and treasures on display throughout the restaurant. 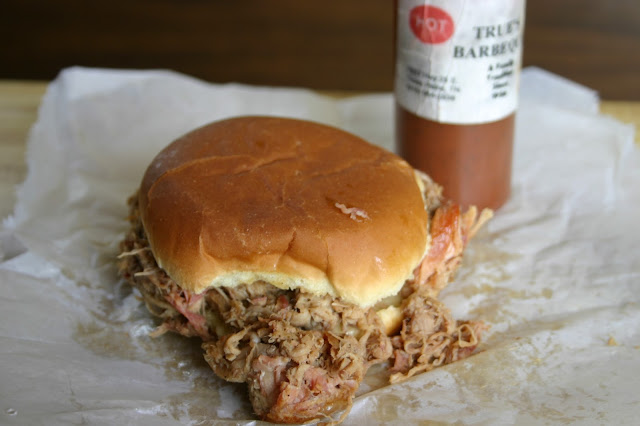 True's serves a fine barbecue sandwich. As you can see, the bun is overflowing with pulled pork. The pork is tender and juicy, perhaps bordering on mushy, with just a hint of smoke and a little bit of pre-applied vinegar-based sauce. I found this sandwich design to be a trend in the Robertson County BBQ joints - pulled or chopped pork with a light application of vinegar-based sauce before serving, and vinegar-based sauce on the side. There were no tomato-based sauces to be found 'round here! 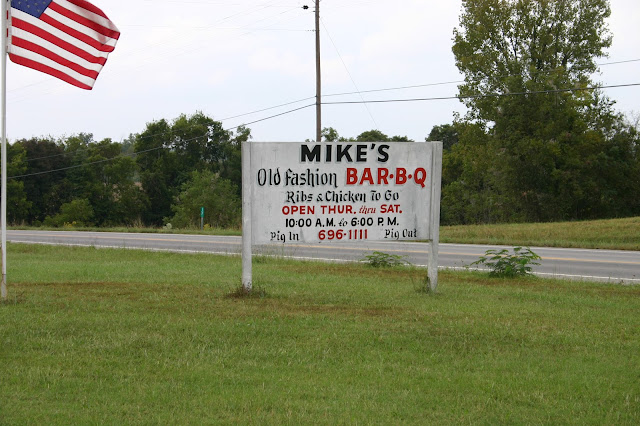 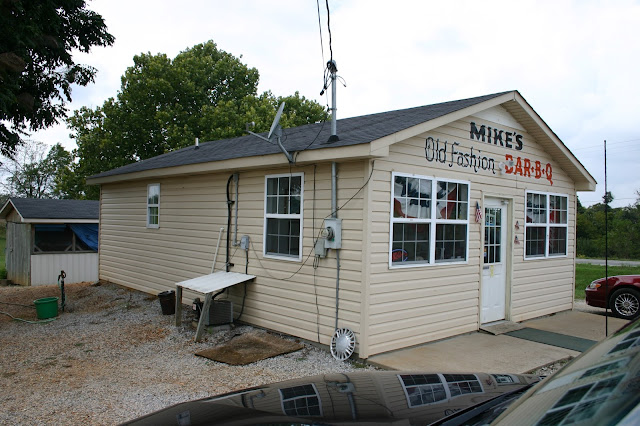 Mike's Old Fashion Bar-B-Q in Cedar Hill is about as close as you can get to the middle of nowhere. Located in a small pre-fab building at the fork of Highway 41 and Dunn Road, Mike's is only open Thursday, Friday and Saturday. The small ordering area is filled with tobacco-related memorabilia. 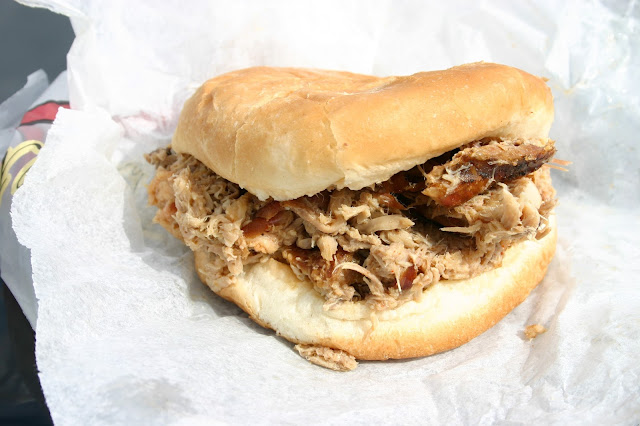 The barbecue sandwich contains plentiful pulled pork that is really tender without being mushy. There are ample bits of chewy bark mixed in. The whole business has been treated with a vinegar-based sauce that is a nice complement to the lightly smoky flavor of the pork. Overall, another really good sandwich. 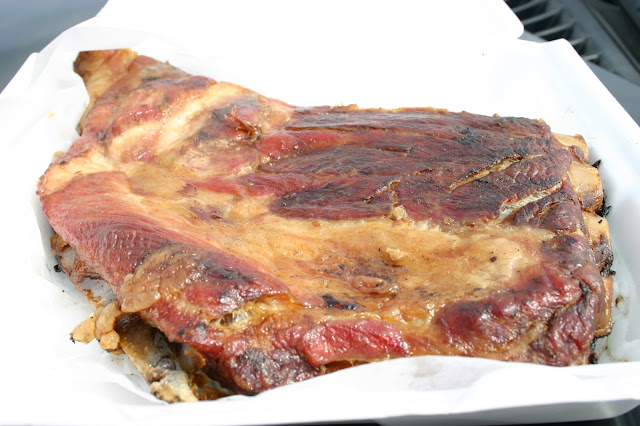 Mike's is the only local barbecue place in Robertson County that serves ribs. These ribs were very disappointing. Little to no seasoning was evident at all, resulting in a bland flavor. Texture was off the mark, too, as the ribs were very tough. 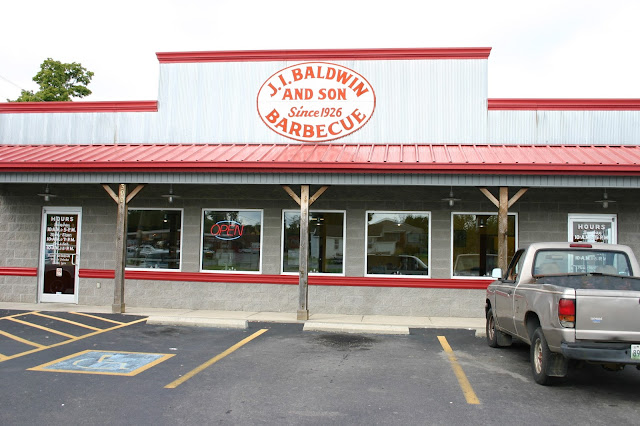 J.I. Baldwin & Son Barbecue, which allegedly has been open since 1926, is located right in the heart of Springfield, which is the county seat. 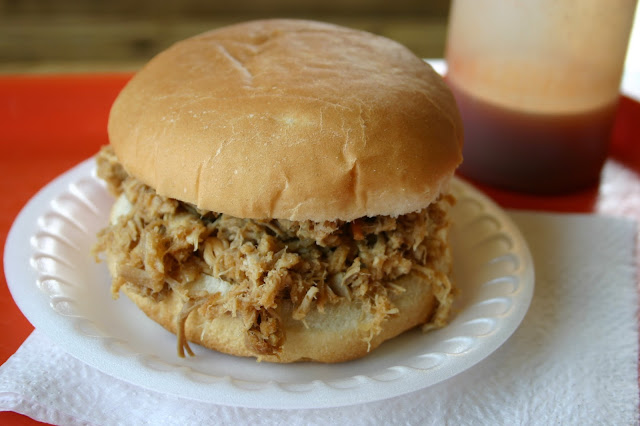 As I'm coming to expect in these parts, Baldwin serves up a mean sandwich. This time, the pork is chopped, but it is still exceptionally tender and juicy. It's not quite as smoky as the other sandwiches in this report, but still has the complement of vinegar-based sauce. And the hot vinegar-based sauce that's available on the side packs quite a punch. 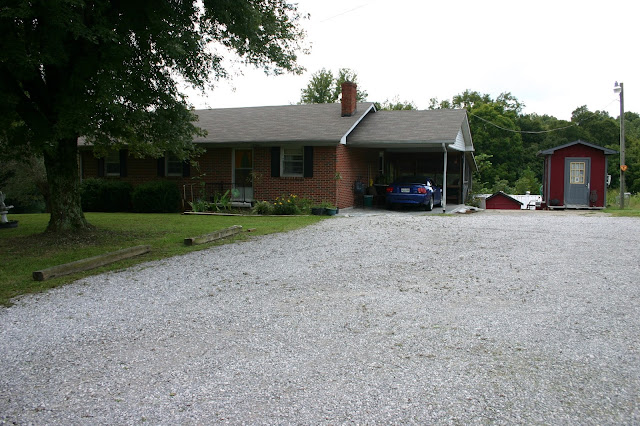 The place that I was most curious about in Robertson County was also the one I was most doubtful about actually finding still in existence. One of the first barbecue-related books I discovered was Real Barbecue by Greg Johnson and Vince Staten. In that book, published in 1988, Johnson and Staten put forth a list of the 100 best barbecue restaurants in America. That list was surely controversial then and it still is today, but the one and only barbecue joint from Middle Tennessee to make the list was Old Fashion Bar-B-Q in Greenbrier. The barbecue was cooked by Thomas Jones as a weekend-only side business and vended out of an old milk truck in his front yard. Johnson and Staten gave it their highest rating - "As Good As We've Ever Had."

Fast forward to 2009 and I am scouting barbecue restaurants in Robertson County. Of course I want to hit Old Fashion if I can, but the chances of it still existing are slim. First of all, it's been 20+ years since the book was written. Barbecue restaurants seem to age in dog years. It's a rarity for one to last that long, especially a mom-and-pop weekend-only operation based out of someone's home. Second, I could find no indication on the internet that this place is still open. I mean there is ZERO reference to this place online - no restaurant listings, no mention in blogs, nothing. Finally, the address given in the book - "335 Hwy 431" - does not exist according to my GPS device. But I thought I'd take a cruise down 431 and see what I could see. 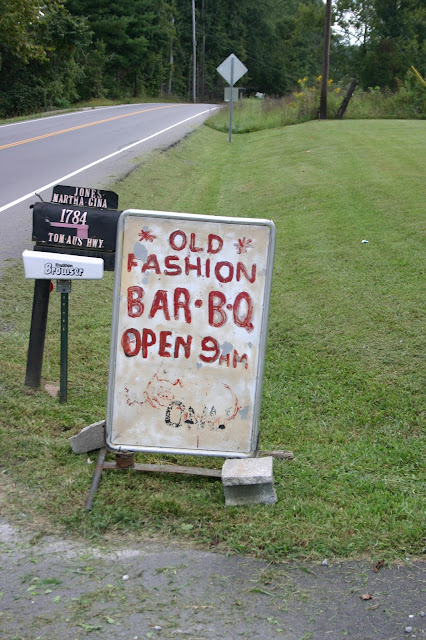 Well, imagine my surprise and excitement when I saw this sign on the side of the road several miles outside of Springfield. 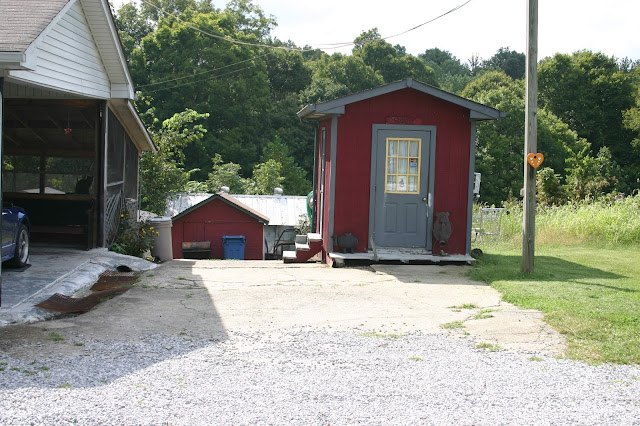 There was no old milk truck, but there was a little hut beside the house with a little pig on the door (and a Visa/Mastercard logo). Soon after I pulled in, a nice older lady emerged from the house and asked if I was there to buy barbecue. I said yes ma'am I am. She went into the side door of the hut and I went into the front door. Inside, separated by a thin screen, we transacted business. Three dollars for a barbecue sandwich. Pork shoulder is the only item on the menu here. "Hot or mild?" she asked. I ordered the hot, and while she was assembling the sandwich, I perused a framed clipping about the place from the Nashville Banner in 1989. After receiving my foil-wrapped sandwich a minute later, I was on my way. 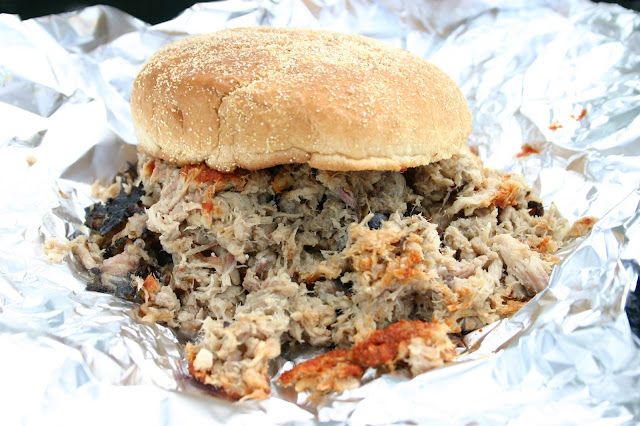 The resulting sandwich was not mind-blowing, but it was very, very good. It was tender as could be without being mushy, and the flavor was fantastic. It had greater than average smoke flavor (most likely hickory) and was perfectly seasoned. The chopped pork texture was studded with lots of crispy black bark pieces. The sauce was a tangy and spicy vinegar-based concoction. If I had one complaint, it would be the bun, which was kind of rigid and didn't do a great job of melding with the meat and sauce.

Overall, a most excellent barbecue sandwich. Obviously, somebody else is eating them, because this place has now been in business for 20+ years. Greenbrier residents must just be very good at keeping a secret, I guess, because I have heard no mention of this place at all through the years. If you want to visit, the actual address is 1784 Tom Austin Highway; Greenbrier, TN 37073. It's just north of Pebble Brook Estates / Golf Course. They are open Fridays and Saturdays only from 9AM till dark or until they run out.

great report. you really went off the beaten path for this one.

Nice expansive review. I have not had ribs in a restaurant that compare with anything that comes off of my cutting board, but I try to keep that in mind.

Great job on finding these spots!

Old fashioned bbq is actually in coopertown and not greenbrier..a small oversight...and how could you experience bbq in nashville wihout going to jacks off of trinity lane.

yo Anonymous check out part 1 the legends

Old Fashioned BBQ is in Coopertown, but it probably has a Greenbrier mailing address.

I am actually the grandaughter of Richard Jones, Old Fashioned Barbecue. His name was Richard not Thomas. Just wanted to correct. Mr. Jones loved his family and his customers. I was honored to read this.

Hello everyone. I am Richard Jones youngest daughter, Sheila Jones Bowling. The business was established in 1978, and Mr. Jones passed in 2004 .Many thanks to all his loyal customers throughout the years. Much love and blessings!

Yes. It was a Greenbrier address, yet it was in Coopertown.

Just for the record to put the barbeque sauce secret to rest: My dad, Richard Jones took the sauce secret to his grave, as he promised his friend the late Sam Chatman who taught him to cook.