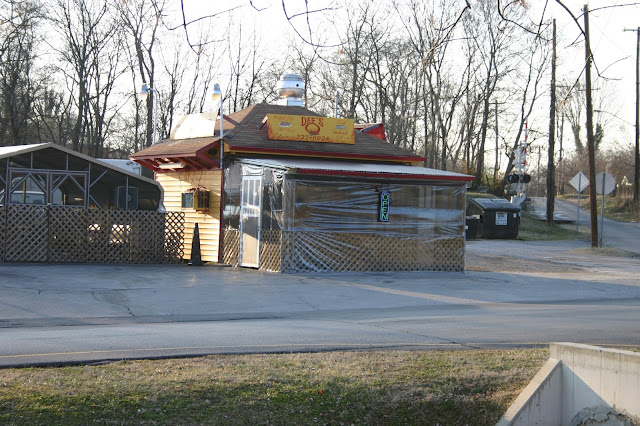 At first glance, it might appear that Nashville's trendy east side is what we might refer to as a "barbecue blind spot." Gallatin Road, East Nashville's main retail and commercial corridor, is completely bereft of any kind of barbecue establishment whatsoever. If you want to find the swine in this part of town, you've got to go off the beaten path.

The western side of Gallatin Road has a distinctly different feel than its bohemian eastern counterpart. This neighborhood, which is bisected by Ellington Parkway and bordered on the west by ultra-gritty Dickerson Pike, is a glimpse into the East Nashville of old, populated by an older, more blue collar demographic. It shows far less influence of the younger hipster crowd which has taken roost on the other side of Gallatin Road. 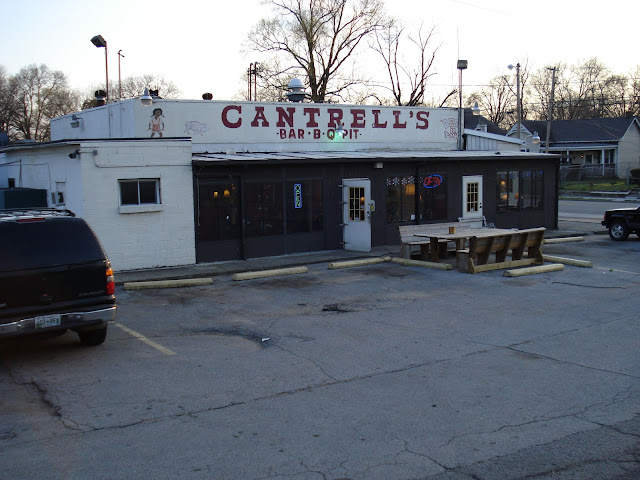 This area is home to Cantrell's Bar-B-Q, the elder statesman of East Nashville barbecue. It sits just west of Ellington Parkway, at the corner of Cleveland Street and Lischey Avenue. Cantrell's has operated on this sleepy corner since 1953. For a spell, they also had a second location on Woodland Street, adjacent to LP Field, but have since abandoned it. 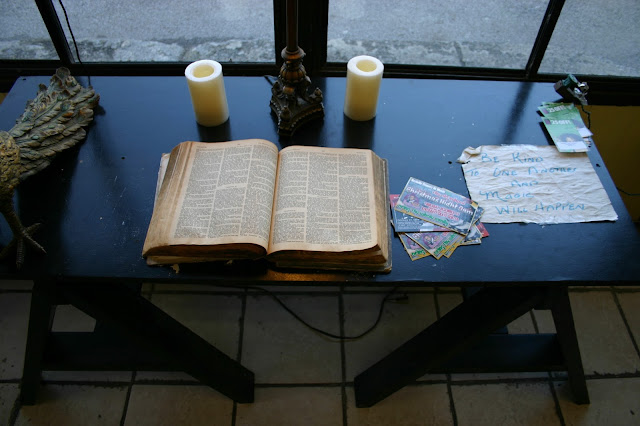 The interior of the restaurant is interesting. The front room is brightly lit and decorated with Muhammad Ali Memorabilia. It also has a table with a large Bible open on it. But on to the food... 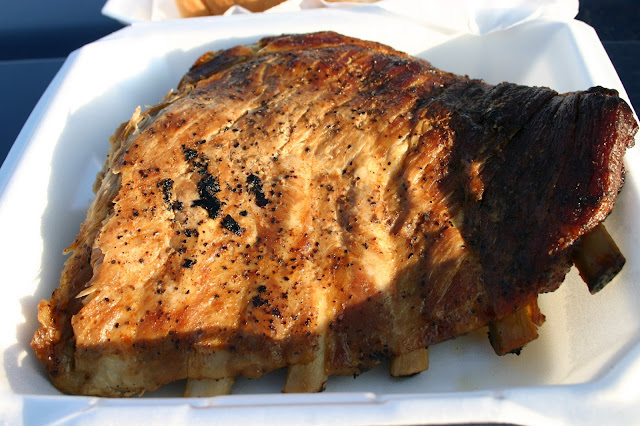 The ribs, like many of those found in North Nashville, were served without sauce. They were a bit undercooked for my taste, save for the very end of the rack, which had a nice lightly charred exterior. The flavor of the ribs was enhanced by the excellent barbecue sauce which was served on the side. It was very reminiscent of the sauce at Mary's on Jefferson Street - bright orange, with lots of mustard and hot sauce flavor. 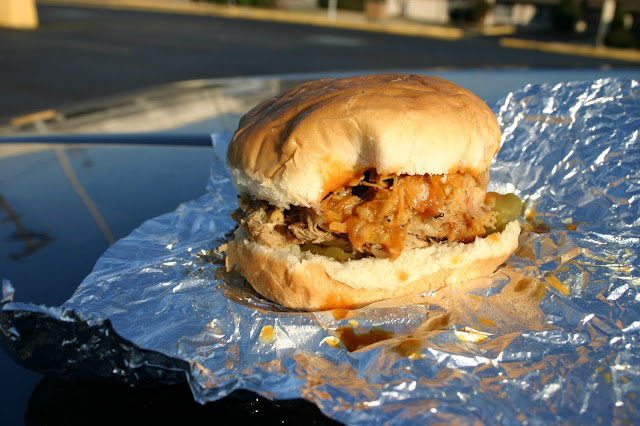 The shoulder sandwich was better overall. The pulled pork was tender and seasoned nicely, and the sandwich came with a shot of that delicious orange sauce. The pickles (which I fully expect to find by now) are on the bottom.

The other barbecue joint which has traditionally been in this neighborhood is White's Fish & BBQ. For years, it occupied a small squat building adjacent to a gas station at the corner of Cleveland Street and McFerrin Avenue. And then, suddenly, it was gone. 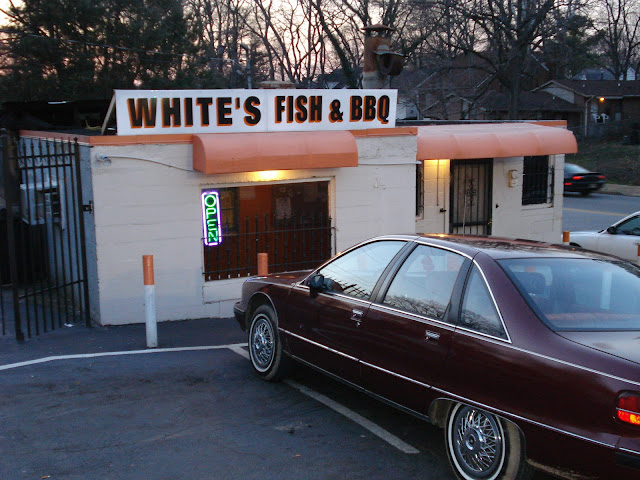 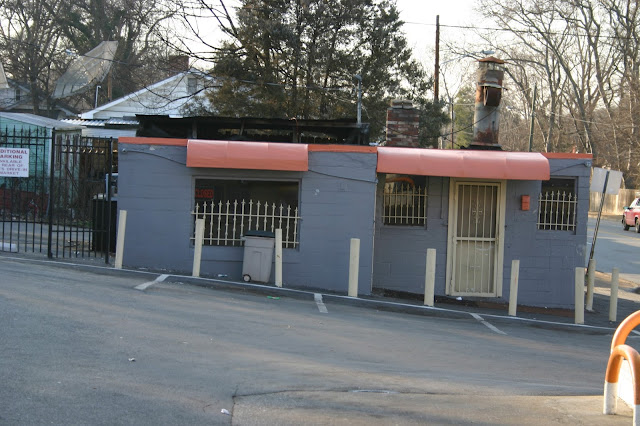 By pure happenstance, when I was meeting Rob at Prince's Hot Chicken the other day, I noticed that a White's Fish & BBQ had opened up right next door. 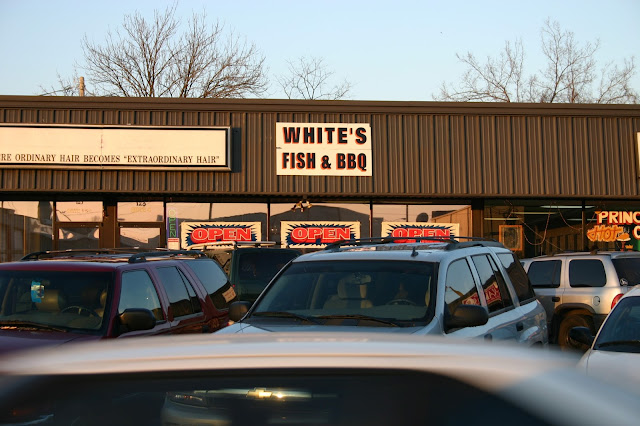 Upon further investigation, I confirmed that yes, it is the same White's. I had actually never had their barbecue before, because I couldn't get over their fish sandwich, which I think is one of the best in town. 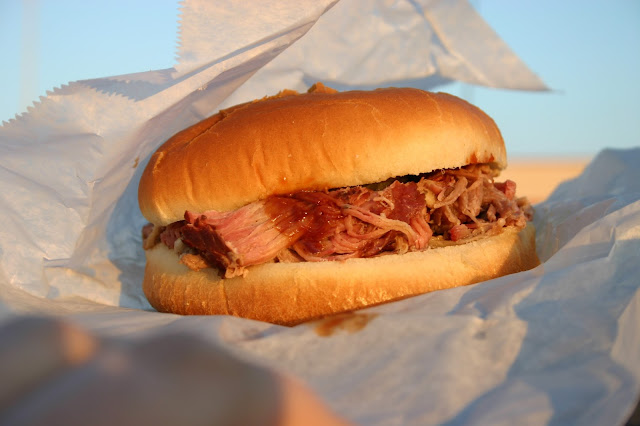 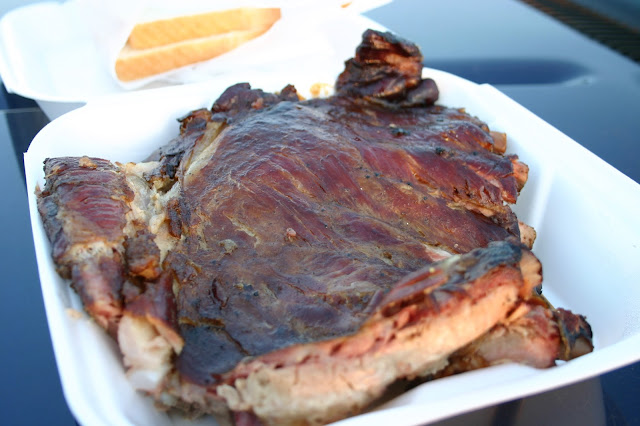 Unfortunately, the same could not be said of the ribs. They were served sans sauce, which is crazy, considering how great their sauce is. And they were overcooked, falling apart upon handling.

Now we move to the other side of Gallatin Road. The two barbecue restaurants here have gotten more publicity, not necessarily because they're better, but because they exist in a more vibrant, revitalized part of East Nashville. 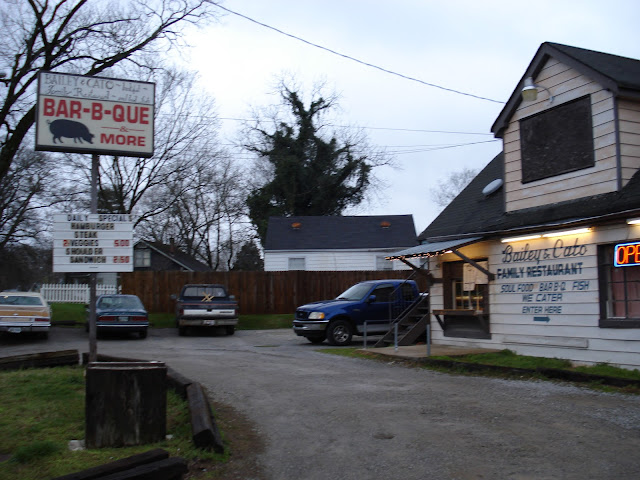 At the flourishing intersection of Riverside Drive and McGavock Pike, right across the way from the sushi bar, the coffee shop, and the soon-to-open chocolate boutique, sits a staunch holdout of old school East Nashville - Bailey & Cato Family Restaurant. It's true that barbecue is only part of the equation here - they have a meat-and-three menu that changes daily, and many of those items are well worth a taste. But how's the barbecue? 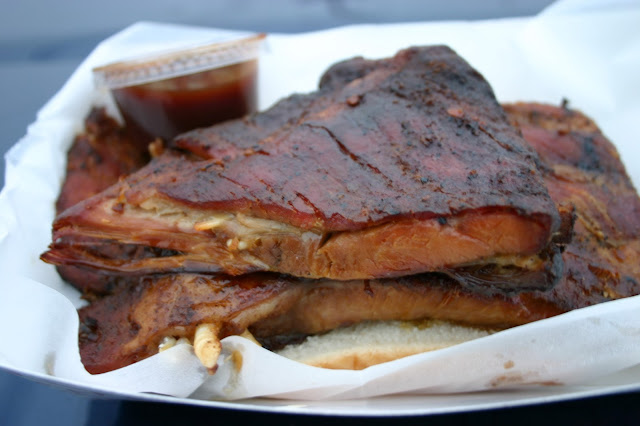 Unfortunately, on the day of my visit for this report, B&C were out of pulled pork, so I could only sample the ribs. As I have now practically come to expect, the ribs were served with the sauce on the side. But these ribs were a definite step above the bland, under-seasoned ribs that have (unfortunately) dominated these reports so far. They were very well-seasoned, if a bit salty, and they were perfectly cooked, with a nicely charred exterior and a juicy, tender interior. And that sauce of theirs is a nice addition, too. It's relatively thin, but sweet and hotter than most - prefect for dipping little pieces of rib meat into. 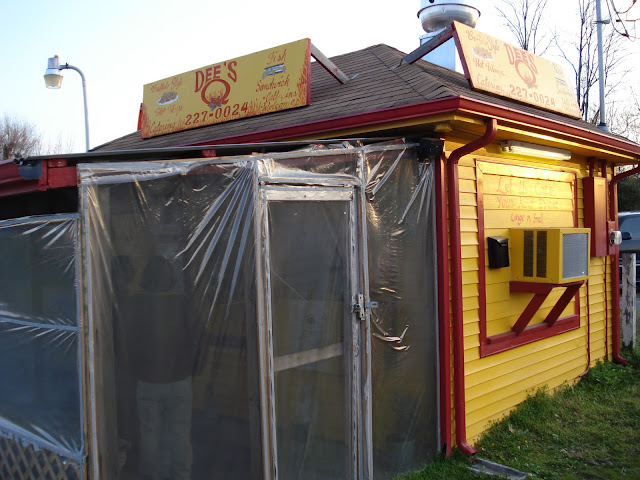 Dee's Q is the relative newcomer in the neighborhood. The Crowder family took over the shack at the corner of Riverside Drive and Rosebank Avenue in 2004, and have since developed a reputation as one of Nashville's best barbecue joints. A glance around the grounds reveals that Dee's is definitely doing things the old-fashioned way - they have quite a collection of cookers, including one mounted on a mobile serving trailer. 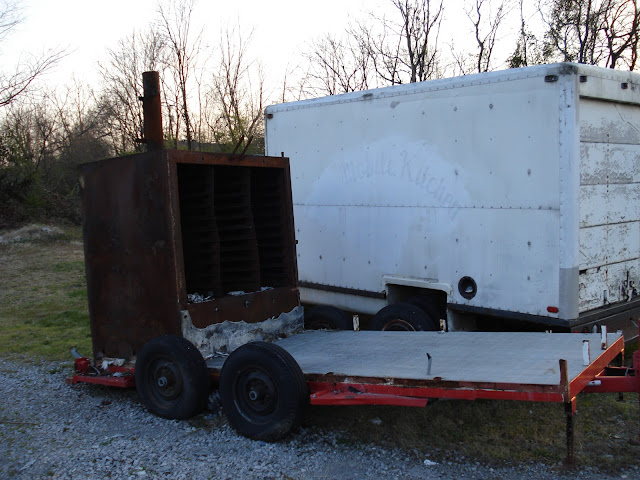 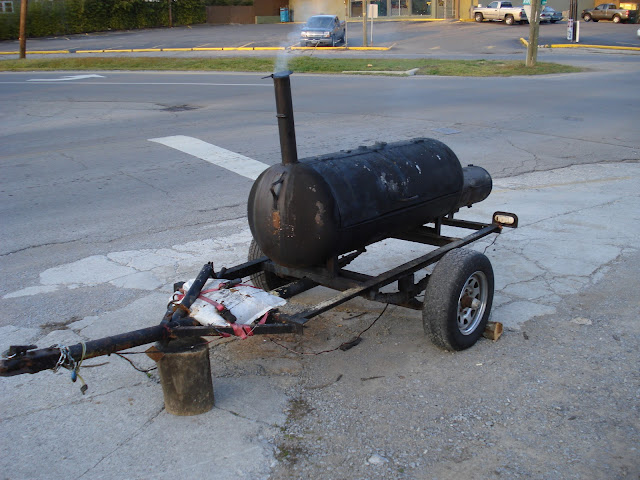 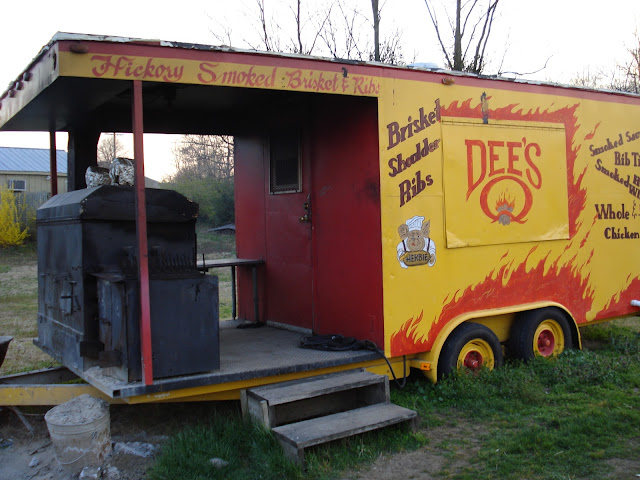 I also have to add that the staff at Dee's are just about the nicest people you will meet at a barbecue restaurant. They've always got smiles on their faces and are always so friendly. 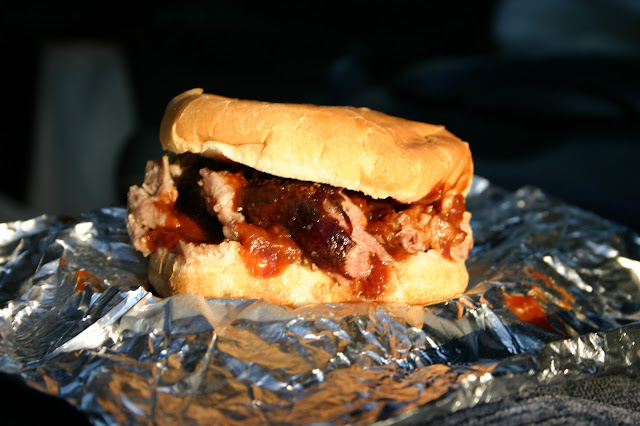 One bite of the shoulder sandwich and you know immediately that this place is cooking with hickory. It's very rare when I'm eating barbecue that I think something is too smoky, but this might just be. The taste of smoke is almost overwhelming. The sweet, thick barbecue sauce does help to temper the smokiness, but it's still pretty powerful. The ribs are more of the same. Dee's sauce serves the ribs well, and the ribs are cooked well, but the pervasiveness of the smoke flavor is overpowering. 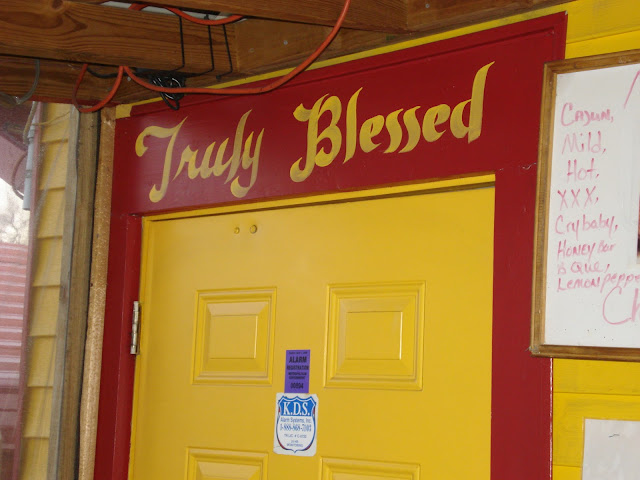 now that we're 5 parts into this series, can we maybe get an overall recommendation as to which to try first/what to order if we've never ventured out to any of these place in Nashville? You summarize at the end of each report, but after reflecting back & considering the whole sample, it would be interesting to hear your thoughts..

thanks for these, really enjoying them!

Thanks for reading, Austintatious.

Of the places covered so far, I would probably most recommend Hog Heaven or Jack's (both covered in Part 1). These places always seem to deliver a good overall experience, and when they're "on", they serve really good barbecue (but consistency is an issue at both). But there are some great places that are still yet to be covered, so stay tuned.

Thanks for doing this, Ben. So I don't have to. I'll just stick to your highlights.

Thanks guys...I haven't been to Cantrell's or White's yet...always nice to have a new barbecue destination...a great series!

They simply concluded our garage area place floor. Excited and satisfied with the professional work. Our garage area flooring is impressive. Stained Concrete flooring company Nashville is stored by the due date and also appears up for his function. Revealed up quite earlier and carried out a doing work working day. A satisfaction to enjoy somebody like Nashville Epoxy Flooring Company do operate within our home

Absolutely stunned with the aid of the effects of this website online! Treatment for addiction insurance