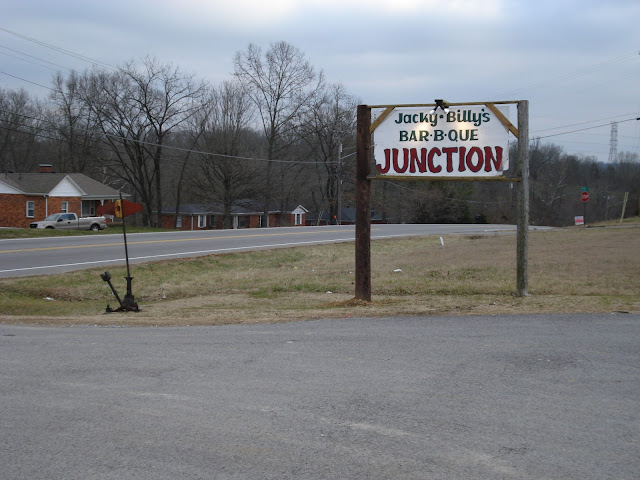 This week, we take a look at the barbecue restaurants in Sumner County's other two major cities - Portland and Gallatin. But first, an addendum from last week. 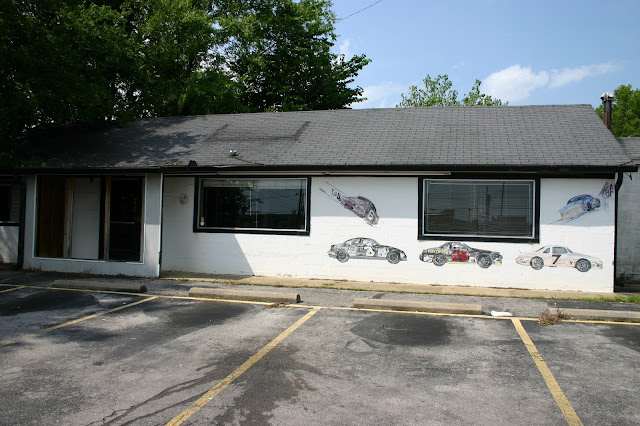 Last week, I reported that it looked like Dicky's Hickory Pit in Hendersonville had closed up shop. But thanks to a tip from a commenter, I learned that they have merely moved to a new location. 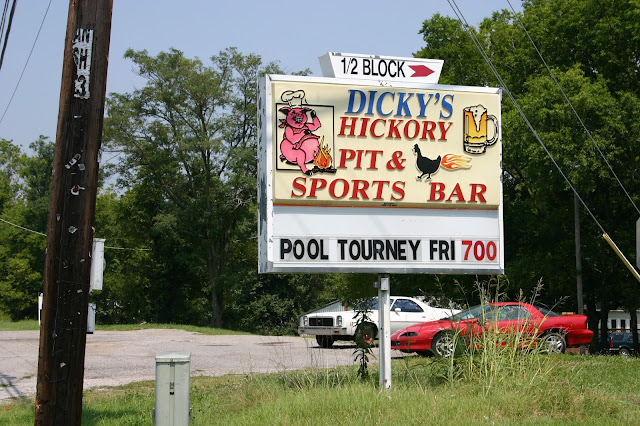 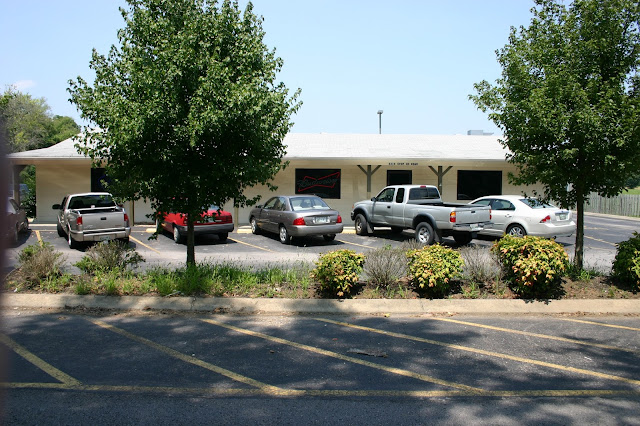 The new Dicky's location is on a rural residential street, but the atmosphere inside remains similar. It's still very NASCAR-centric - the place was packed when I was there with guys watching the race on TV. 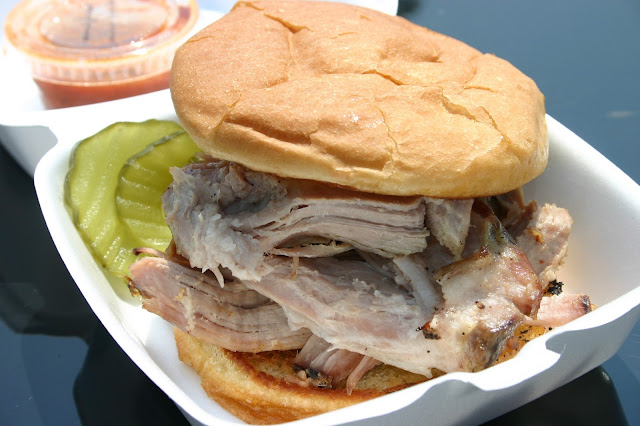 The barbecue sandwich is unique in that the pork is pulled in very large chunks. It's good, tasty pork shoulder, if a little bit dry. But the sandwich is done a great favor by its griddled bun, giving it a nice crunch with each bite. I'm sure it's labor intensive, but I don't know why more barbecue joints don't do this. To me, it makes a big difference in the overall quality of the sandwich. 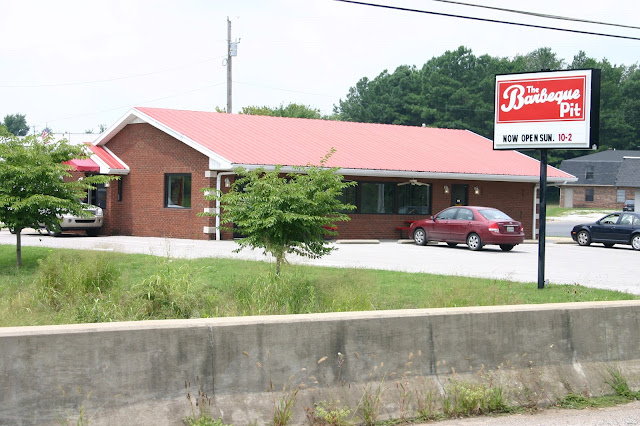 Up in Portland, Tennessee, near the Kentucky border, the local barbecue place is The Barbeque Pit. 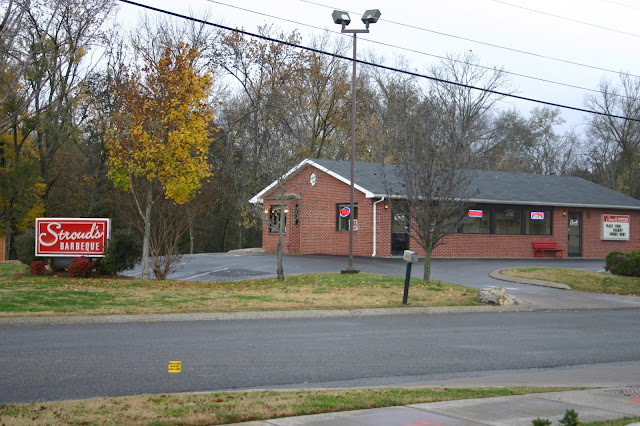 I immediately noticed a similarity in both the logo and the building design to Stroud's. I'm not sure what's up with that, but the similarity did not end there. 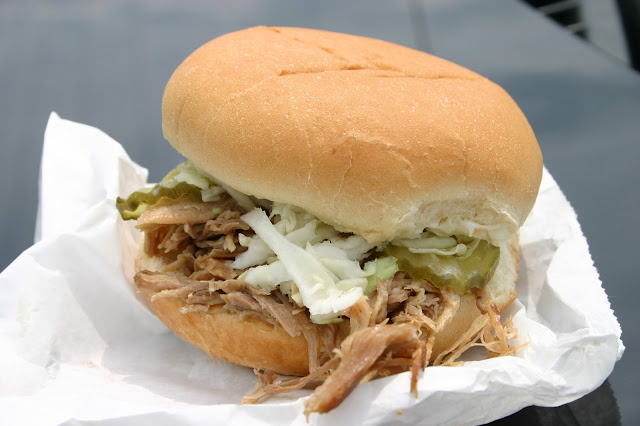 Like Stroud's and many others in Middle Tennessee, the Barbeque Pit's pork sandwich came dressed with mayonnaise, slaw and pickles. This was one of the best of the sandwiches served in this style - the pork was super-tender and juicy and the slaw tasted fresh. But like most others in this style, the pork showed no evidence of having been smoked - so is it really barbecue? 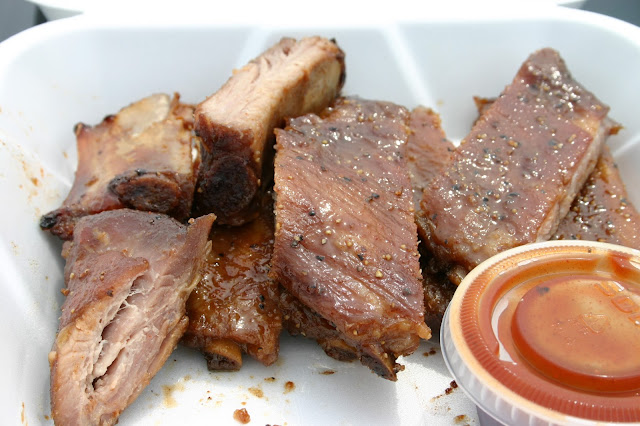 The Barbeque Pit's ribs were unique. Like the pulled pork on the sandwich, the meat had no smoke flavor to speak of, but had a very unique, almost Asian-style sauce that is unlike anything I've had on ribs outside of Chinese restaurants. The ribs were a bit tough though. 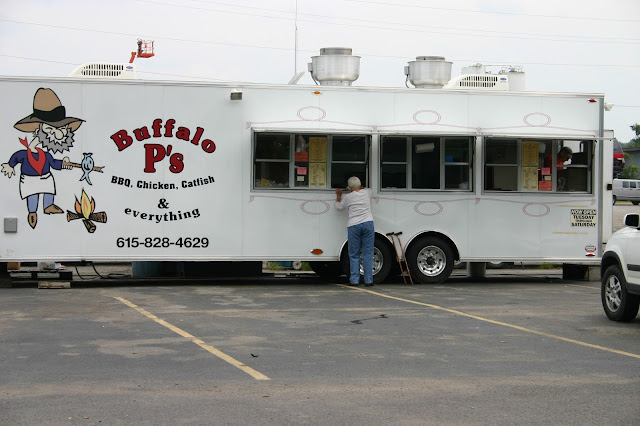 Last time I visited Buffalo P's in January 2008, I was underwhelmed. That was one of our very first reviews on this site. Now I don't know if P's has gotten better, or if my standards have declined, but this time I thought it was pretty good. They're still set up in the same parking lot in Gallatin and still working on a big offset cooker. But change is on the way - they will soon move to a brick-and-mortar location in downtown Gallatin. 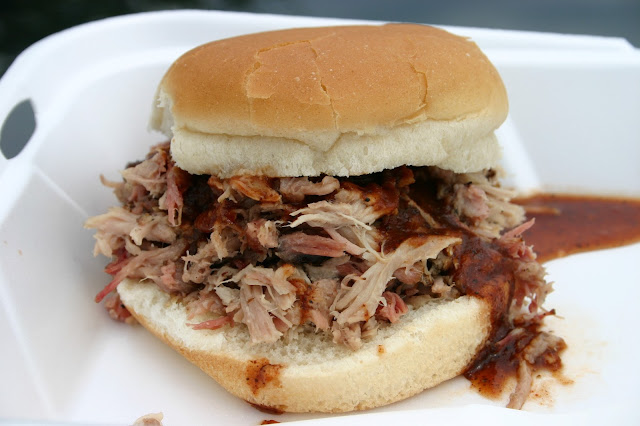 The pulled pork on the barbecue sandwich was absolutely on point. It was tender and had great flavor and lots of smoky essence. The one weakness in my opinion was the sauce. It was very plain and uninspiring. Otherwise, a good sandwich. 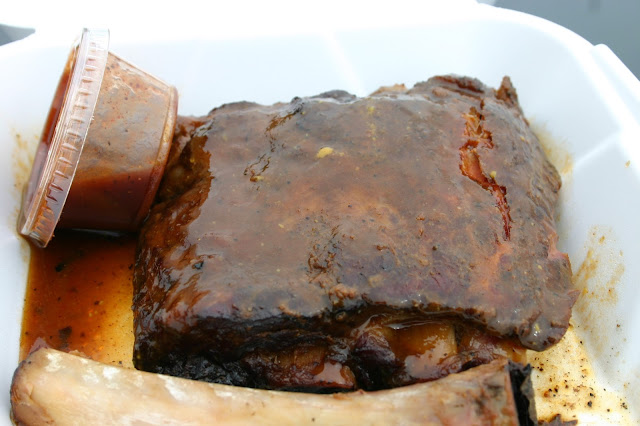 The ribs were likewise handicapped by the sauce. They were cooked to a nice tenderness and had just the right amount of smoky flavor, but the painted on tomato and vinegar sauce was a disappointment. 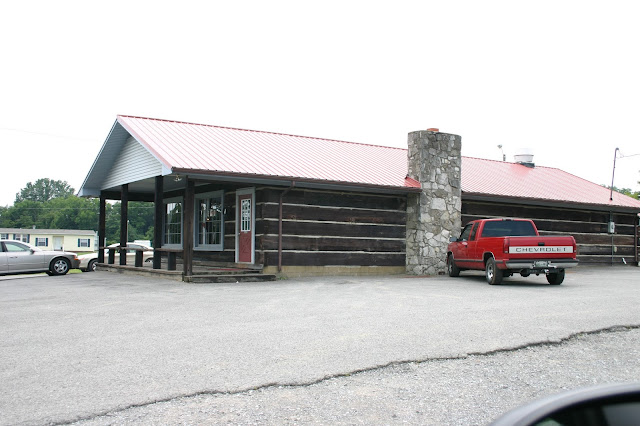 Our last stop in Sumner County is Jacky & Billy's Bar-B-Que Junction in Gallatin. The folks that own and operate this place are about as friendly as you will find in the barbecue business. Unfortunately, the barbecue, on this day, was just not very good. 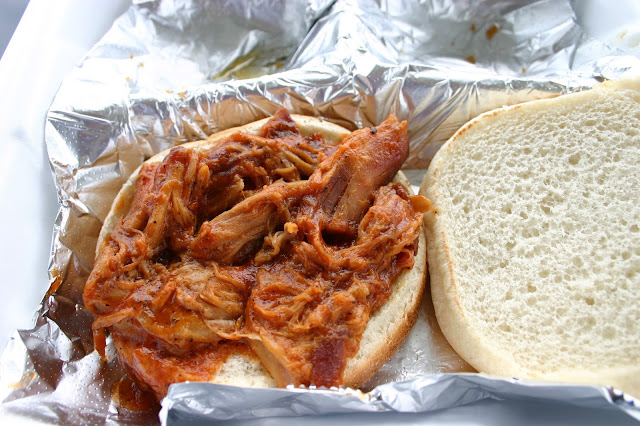 The pulled pork was pulled directly out of a bath of thick tomato-based barbecue sauce. Consequently, the meat was absolutely smothered with sauce. The texture was mushy and there was no discernible flavor beyond the onslaught of sauce.

BP, I was going to tell you that Dicky's had moved but someone beat me to it.

Where they are now, 4 places have been there since we moved to Long Hollow Pike (just down the road) 5 years ago.

Stop 30 BBQ was there when we moved here and they left and went to White House. I don't know if they are still in business.

Then a pizza place moved in and didn't last a month.

Then another place and so on...

Dicky's moved from behind the Dodge Chickens gas station and they have been packed ever since.

At the gas station (which I passed by a lot) I hardly ever saw anybody there at Dicky's so I never tried it.

Well, the place in Portland actually used to BE Stroud's. So that's what's up with that!

And Jackie & Billy's in Gallatin has a great BBQ plate. I've never ordered it covered in the red sauce, but the plate with mild sauce is fabulous, but be sure and order a side of home fries! Yummo!

Thanks for the review of Buffalo P's. I've been tempted to stop in but the bus in a parking lot scenario made me nervous.

My wife and I tried Dicky's their menu is great and so is the food and the service. Would revisit soon.