NASHVILLE BARBECUE: Part 19 - "Barbecue by any other name..." 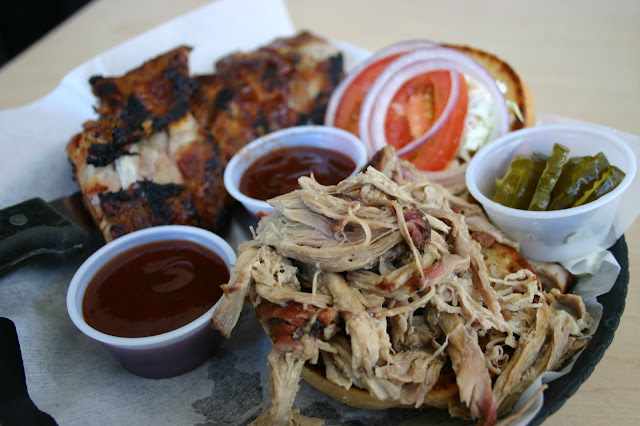 Greg Johnson and Vince Staten's excellent book, Real Barbecue, begins with an interesting discussion of what real barbecue is and how to go about finding it. There are the classic criteria of a smokey aroma around the place and of a mix of pickup trucks and luxury cars in the parking lot. But they also offer the suggestion that 'real barbecue' joints should not specialize in anything other than barbecue.

I decided to put this to the test in Nashville, where there are several restaurants that, while not 'barbecue joints' per se, still have a reputation for serving great barbecue. 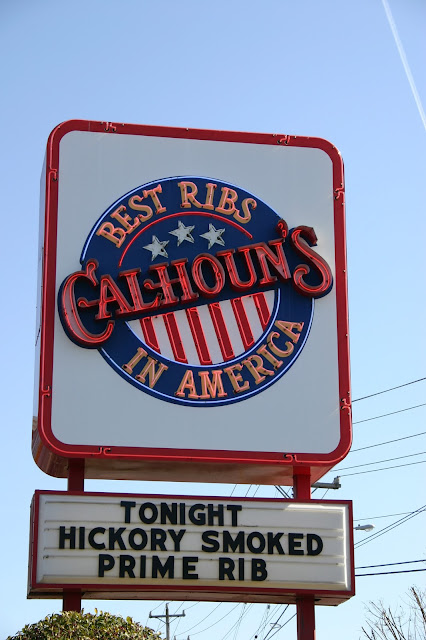 First up is Calhoun's, and their self-proclaimed "Best Ribs in America." Well, they did win first place at Berea's National Rib Cook-Off in 1984. This is a small scale chain that was started in Knoxville in 1983. They now have eight locations - six in East Tennessee and two in the Nashville area. I went to the one on White Bridge Road. 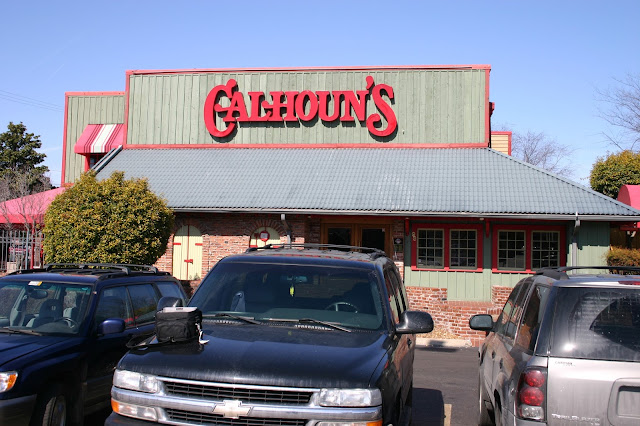 The restaurant is gargantuan - two stories, with a huge bar downstairs. I can imagine that back in the heyday of Lion's Head Village, this place was absolutely booming. My buddies and I went pretty frequently in high school for all-you-can-eat ribs on Thursday nights. But these days, business seems pretty slow.

Although the ribs are clearly their signature item, you can also find: spinach and artichoke dip, chicken cordon bleu, and an oriental chicken salad, among other things. 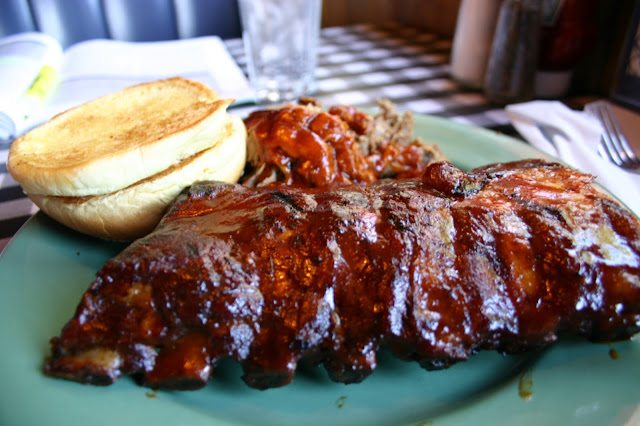 I'll tell you what - I don't know about best in America, but these ribs are not bad at all. They're baby backs, but they have a good amount of meat on them. And they're cooked to a perfect tenderness. Flavor-wise, there is some room for improvement. Despite the fact that they're 'hickory smoked,' there is little to no smoke flavor on the ribs. Calhoun's house barbecue sauce, while not outstanding, complements the pork flavor well. It is a thinner sauce than I would have expected, and not as sweet. Overall, a good but not great rib for a restaurant.

The pulled pork was good as well. It was super tender and juicy, and was very well seasoned (if a bit salty). And although there was a baby little smoke ring visible on the bark pieces, there was again no discernible smoke flavor. 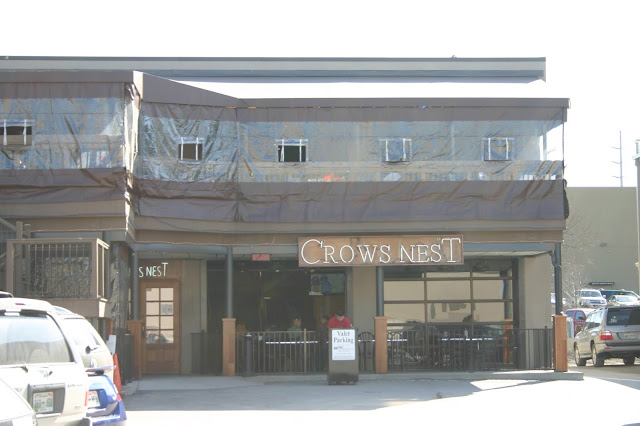 Next up, the Crow's Nest in Green Hills. This is a relatively new restaurant that took over the space long inhabited by the Box Seat. They have certainly spruced the place up, because in its later days, the Box Seat was an absolute dump. And the Crow's Nest is still a sports bar...kind of - their menu says, "Sometimes a Sports Bar, Always a Restaurant."

The crew that owns this place obviously have a proclivity for barbecue. Among other places, they own the local chain of Corner Pub restaurants, whose "Smokin' Monday" promotions have been very popular. Also, they entered the Music City BBQ Festival last year under the Crow's Nest name. However, barbecue is far from the sole focus at the Crow's Nest. In fact, they describe their cuisine as "Gulf Coast Southern Comfort." In addition to barbecue, you can find: oysters on the half shell, shrimp & grits, jambalaya, and fettuccine alfredo. 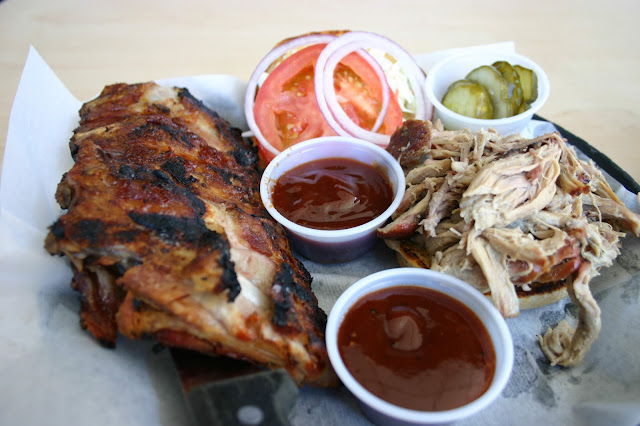 First, let's address the elephant in the room. Yes, they did garnish the pulled pork sandwich with tomato and onion. This is pretty much inexcusable. I mean, *Whitt's* thinks that's excessive. The bad news is: the pulled pork is not very good. It tasted bland and completely unseasoned. The good news is: the barbecue sauce is amazing. They do make it in house and I am here to say that this is one of the best barbecue sauces I have tasted in a restaurant. It cures all manners of ills, and that pulled pork sandwich is ill (not the good ill).

The ribs were moderately better. They were cooked to a nice tenderness - not falling off of the bone, but still very tender. They seemed to have been finished over direct heat, which yielded some nice charring. And while they were seasoned better than the pork, they were still a bit lacking in the flavor department. It was nothing that the sauce couldn't fix, but the rib unadorned was definitely a disappointment. 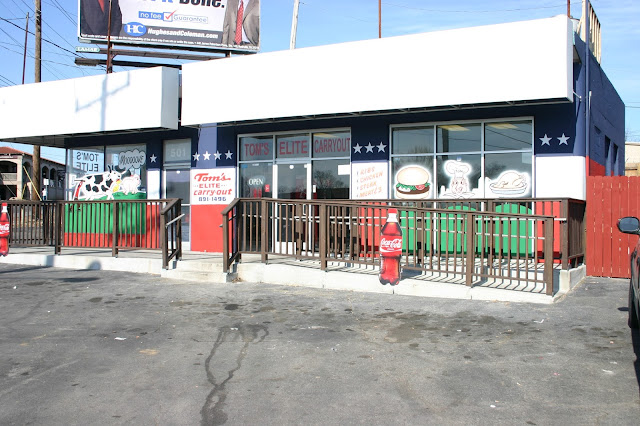 Our final stop in this report is decidedly more blue collar. Tom's Elite Carryout is in East Nashville on Gallatin Road. It's neat that they used the word elite, because before this was a restaurant, it was Elite Motorcars, a used car lot that has since moved to another location. And despite the fact that carryout is in the name, there are several tables inside if you want to eat there. In addition to barbecue, you will find: meat&3, steaks and burgers. 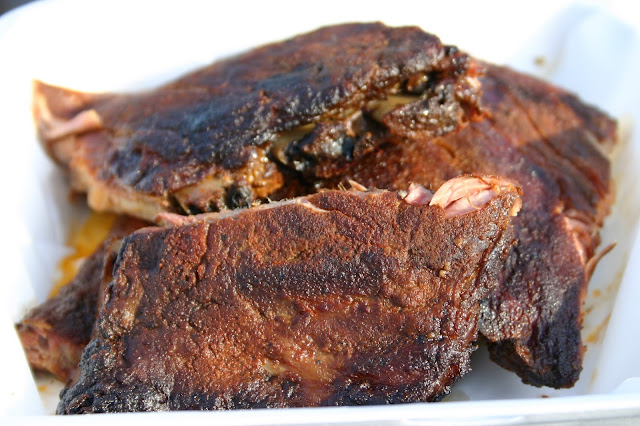 Reuben's Rockin' Ribs are served sans sauce, but with a savory rub, which gives the ribs fantastic flavor. Sauce is served on the side, but is not necessary. Contrary to the two other places visited in this report, these ribs have plenty of smoke flavor. My one complaint is that these ribs overshot the runway a bit on tenderness. I'm not sure if they were cooked that way, or if they just sat too long in the warmer, but they were absolutely falling apart with tenderness. 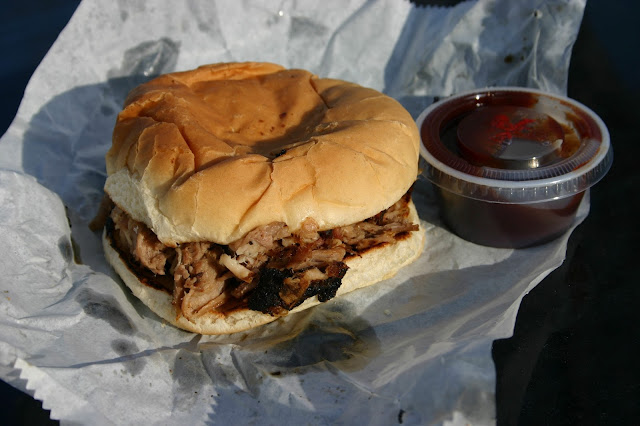 The shoulder sandwich also had great flavor - again, just enough smoke and very well seasoned. Again, the tenderness was a bit off. The pork was relatively dry, suggesting that it had either been cooked too long or had sat too long waiting to be served. Overall, though, this is about as solid an option as there is on the east side.

Good Article. Love getting the low down on all the local spots here in Nashville.