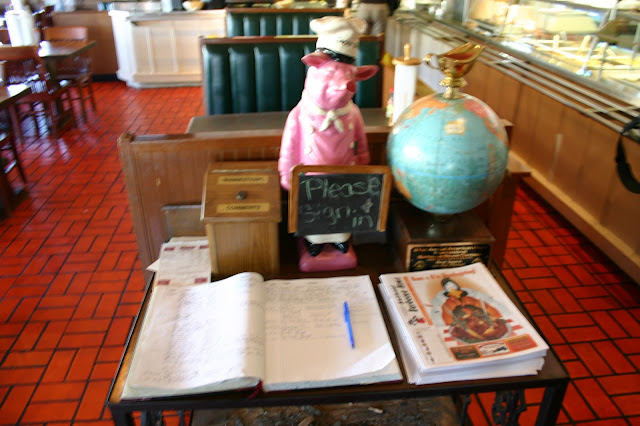 Nashville is not generally known as a great barbecue town. That's not to say that there isn't a lot of barbecue to be found here - there certainly is. But with barbecue meccas like Memphis to the west and North Carolina to the east, the Music City tends to get lost in the shuffle. Our local joints rarely get mentioned when national barbecue best-of lists are compiled. And the mid-state is not often a stop on most foodies' barbecue pilgrimages through the South. So is the barbecue in Nashville inferior, or just underappreciated? After experiencing the best of what Memphis has to offer earlier this year, I set out to see how Nashville stacks up. This will be the first in an ongoing series of reports to discover whether there is truly great barbecue to be found in Middle Tennessee.

For this first report, we could've played it safe and started out slowly, visiting some lesser known places to get warmed up. But you know that's not how we roll. We're going straight to the sacred cows. And in Nashville, as far as the popular vote is concerned, you don't get any more sacred than Whitt's. 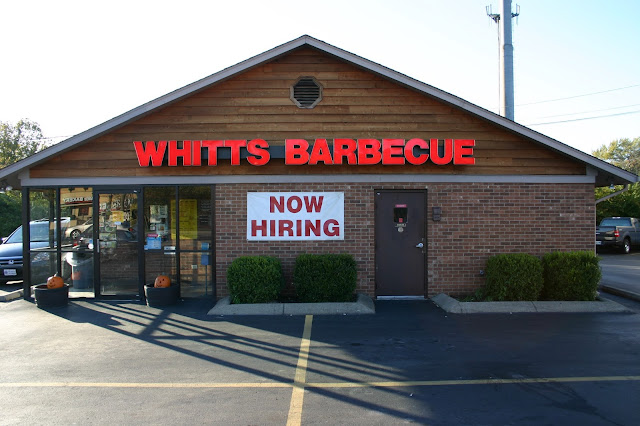 Whitt's has been voted best barbecue in the Nashville Scene's readers poll for about 20 years running. I think the reason for their success is twofold. First, they have over 20 locations in Middle Tennessee and Southern Kentucky. No matter where you are, chances are there is a Whitt's nearby. So their exposure is immense. Second, they offer a really consistent product. You know that no matter which location you visit, the barbecue will taste the same. 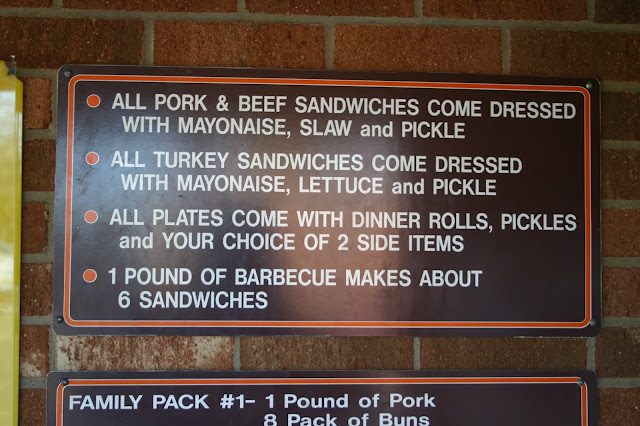 And, as you can see by the sign, if you order a barbecue sandwich, it's going to come dressed with mayonnaise, slaw, and a pickle. 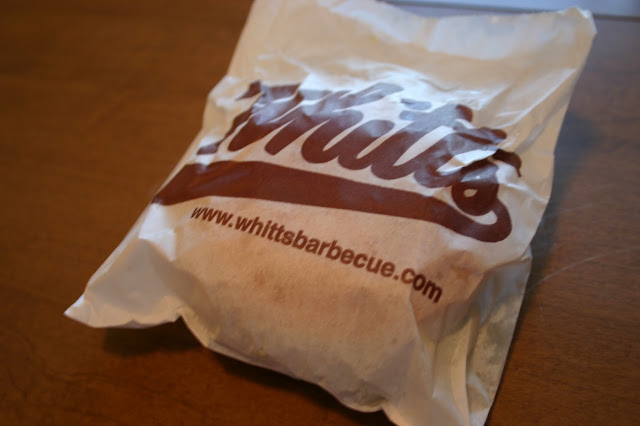 And your sandwich is going to come in a little Whitt's bag. 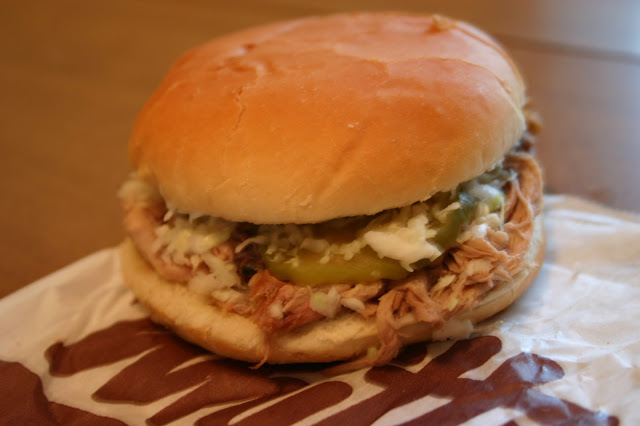 If you think that looks like a tasty sandwich, you're right - it is. The problem is, it doesn't taste like barbecue. Whitt's pulled pork is always tender and juicy (it arrives having already been hit with a thin au jus type sauce), but there is absolutely no trace of smoke flavor on the meat. And there are no discernible outer bark pieces either. I'm fairly confident that this pork has not been smoked at all, but rather cooked in some other manner. Which is okay - like I said, it's a tasty sandwich (and a great deal at $1.25 on Wednesdays). Just don't call it barbecue. 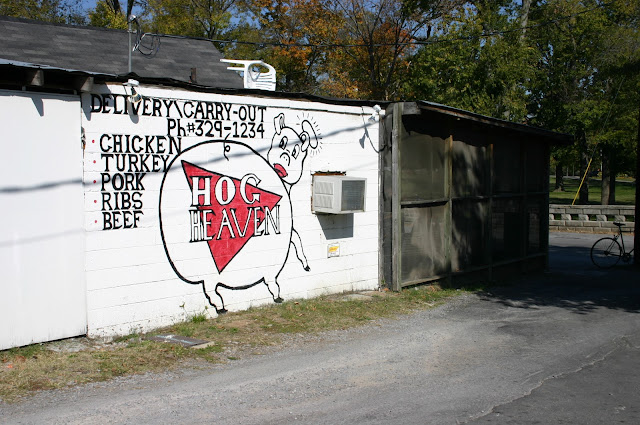 Hog Heaven is a much more charismatic barbecue experience. They only have one location, and it's right off of West End, next to Centennial Park. Although it is just a walk-up window and a couple of picnic tables, their slogan boasts of "outdoor seating for 3,000". 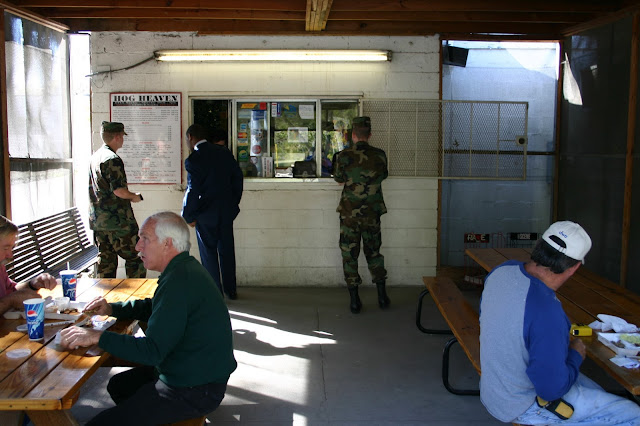 Hog Heaven's pulled pork sandwich is more traditional than Whitt's, but does still come garnished with pickles. I'm not sure if pickles on a barbecue sandwich is a "Nashville thing", but I have rarely seen it anywhere else. Thankfully, most places put the pickles on the side so that people like me who don't want them can easily discard. 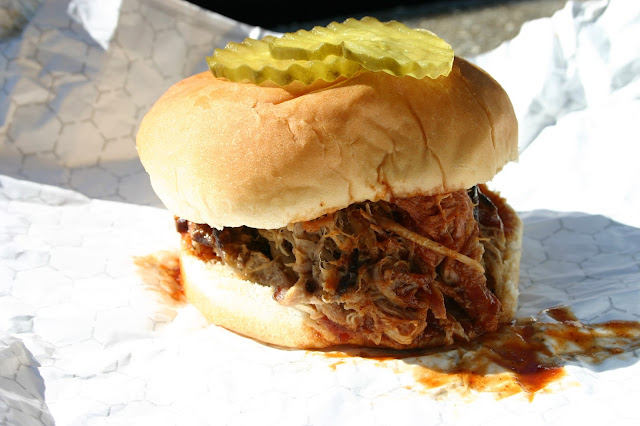 Whatever Whitt's pork lacks in smoke flavor and bark pieces, Hog Heaven definitely makes up for. Although it is lightly seasoned, smoke is the is the main complement to the natural flavor of the pork, which is tender as can be. The sauce is ketchup based and lightly sweet, but is short on the kind of flavor that could make this sandwich truly transcendent. 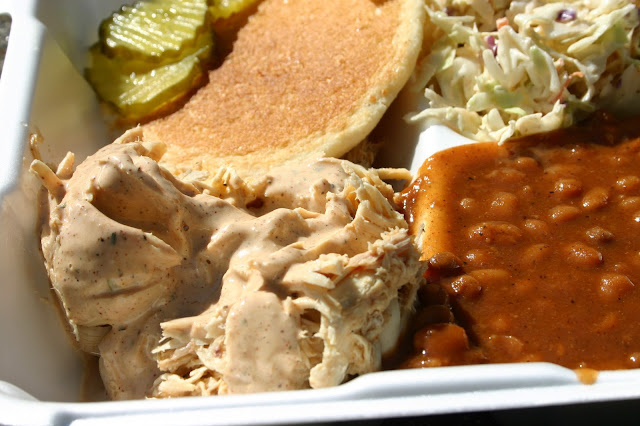 A Hog Heaven specialty is pulled smoked chicken served with white sauce à la Big Bob Gibson. The highlight here is definitely the sauce, which is tangy with just a bit of bite. The chicken itself is very dry and lacking any significant flavor. 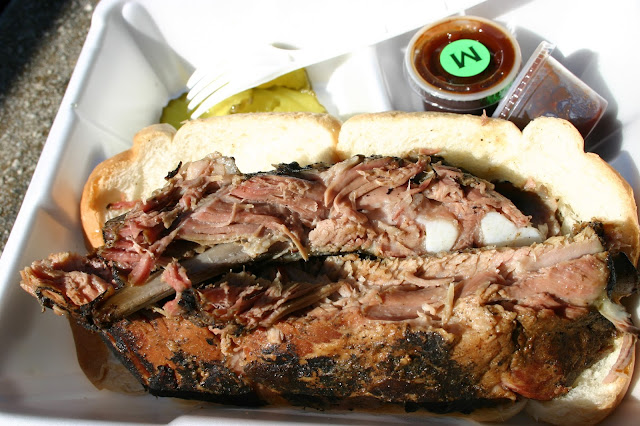 Another popular item at Nashville area barbecue joints is the rib sandwich. Unlike a McRib, this is definitely not meant to be eaten like a sandwich! It typically consists of 2 to 3 spare ribs perched on a couple of slices of white bread (again garnished with pickles). Hog Heaven's ribs are served without any type of sauce applied. They are cooked to the point that they easily pull away from the bone. The texture tends to be mushy and the flavor rather bland. Dipping the meat in the barbecue sauce that comes on the side helps a bit, but overall these are unimpressive pork ribs. 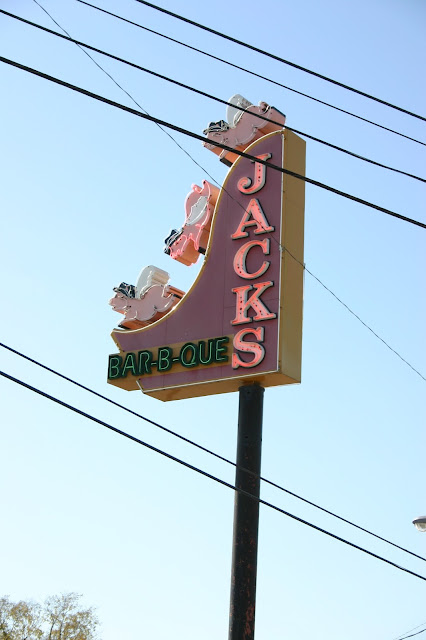 Jack's Bar-B-Que is perhaps Nashville's best known barbecue joint when it comes to visitors. Their location on lower Broadway downtown does a brisk business, serving tourists cafeteria-style as they prepare for a night of line dancin' and honky tonkin'. I usually visit the Trinity Lane location, just because it's more relaxed and less crowded. 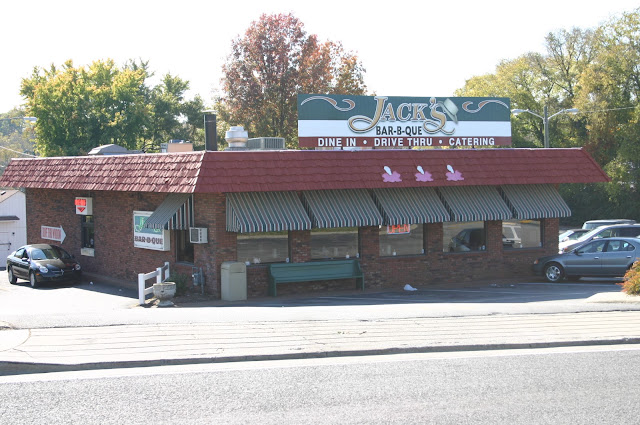 The first thing you notice when you get out of your car is the thick smell of hickory smoke in the air. This is almost always a good sign, Dear Reader. Jack's has a set of large cookers attached to the back of the restaurant. 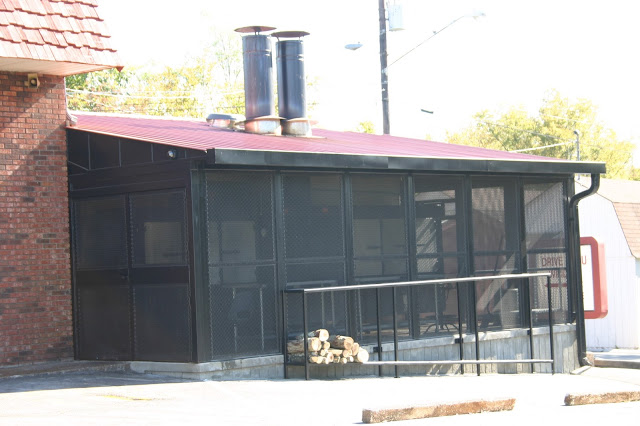 Apparently, a lot of tourists make it to this location, too, because right when you walk in, they have a guestbook and a globe to mark where you're from (pictured at the top of this report). But they don't forget the locals, with the football schedules for all four local college football teams. 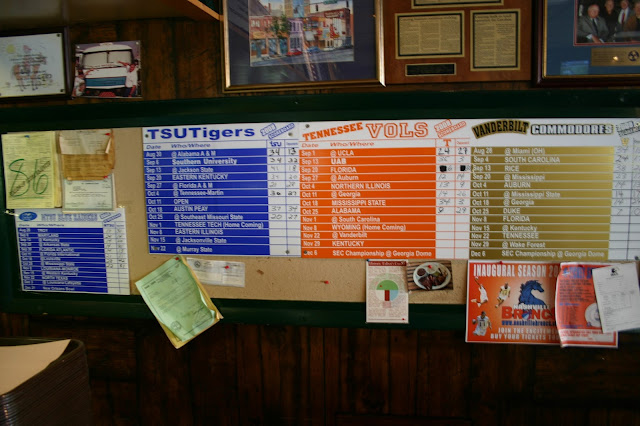 And there are lots of signs around the restaurant to remind you that this is barbecue done the right way. 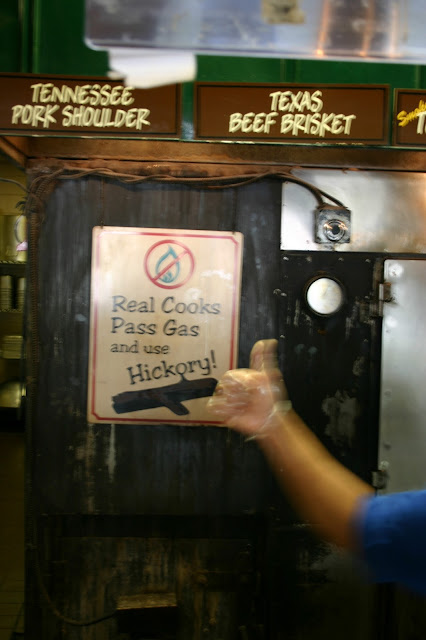 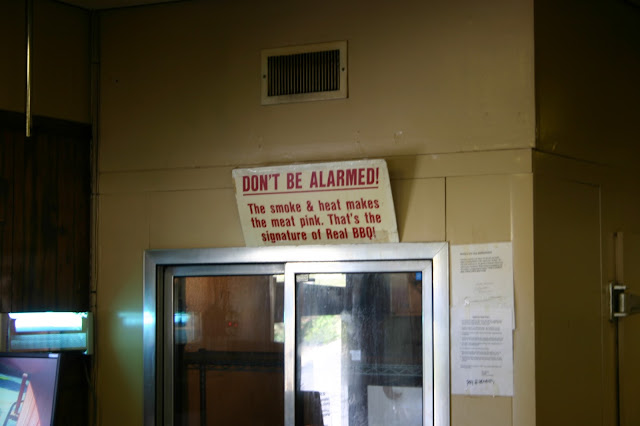 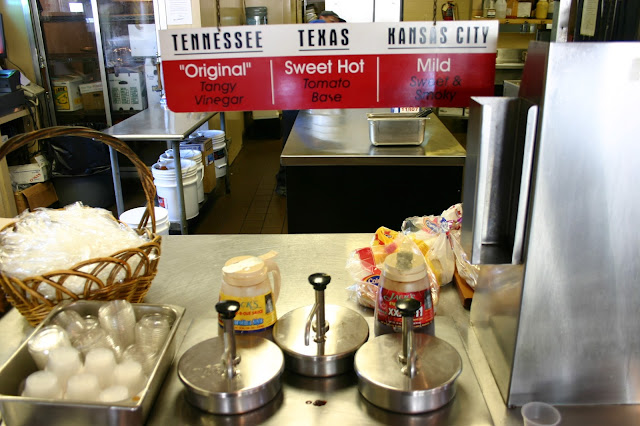 But hey, we're not here to compare ambiance or sauce bars...how's the barbecue? 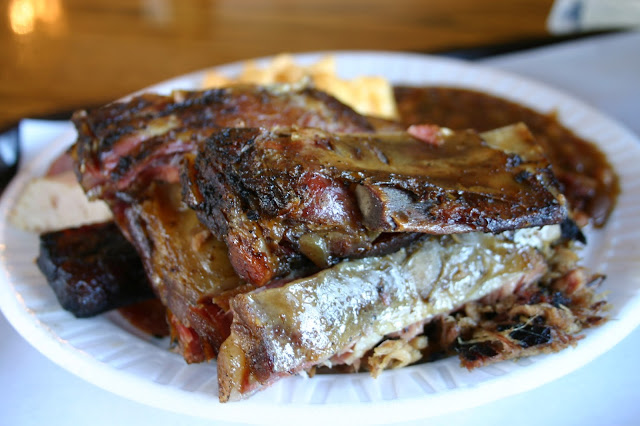 A combo platter comes with a lot of meat. I got ribs, pulled pork and sausage. The sausage was utterly forgettable. The ribs, sitting on top in the above photo, are probably the best thing that Jack's does. They might be cooked just a bit too long (if you glare at them hard enough, the meat falls off the bone), but the flavor is good and they have a nice char on the exterior. They have just the right amount of smoke flavor, and they are well seasoned. They come without sauce, so you can choose your own adventure at the sauce bar. Overall, a very serviceable rack of ribs. 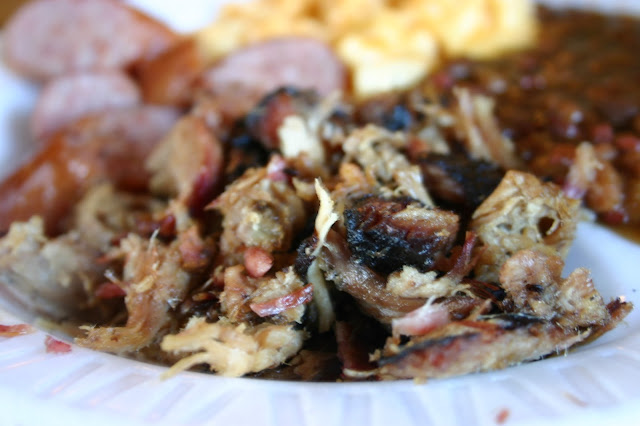 The pulled pork, on the other hand, is not so serviceable. Perhaps I just got part of a bad batch, but on the day I visited, the pork was overwhelmingly smoky, to the point of having an acrid taste. I have never before tasted pulled pork that was TOO smoky, but this certainly was. Not even the Texas Sweet Hot sauce could salvage it.

Ever tried Puckett's barbeque and ribs? I think both are pretty good..even better at the Leiper's Fork location.

You know, I have not ever had the barbecue at Puckett's. I will definitely check that out. Thanks.

Word to that - Puckett's in Leipers Fork has some pretty dang good pulled pork, and the last time I was there a month or so ago they had a smoker in operation out front.

Stopped at Whitt's today in Lebannon on the way home from Nashville. My thoughts were that they reminded me of Buddy's BBQ in Knoxville.....which also wins "best of" every year. It's BBQ fast food, not the BBQ I want.

That being said, it still beat the heck out of stopping at a fast food burger joint for lunch!